Was there Friday afternoon for a pre-opening sneak preview n a coupla drinks. 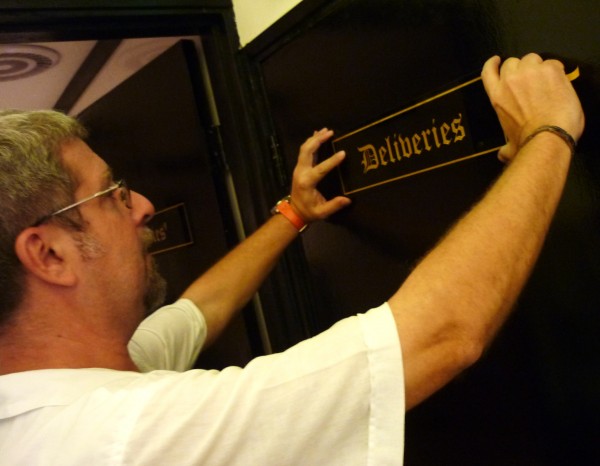 Geoff setting-up. If ur pregnant & drunk u can deliver babies here 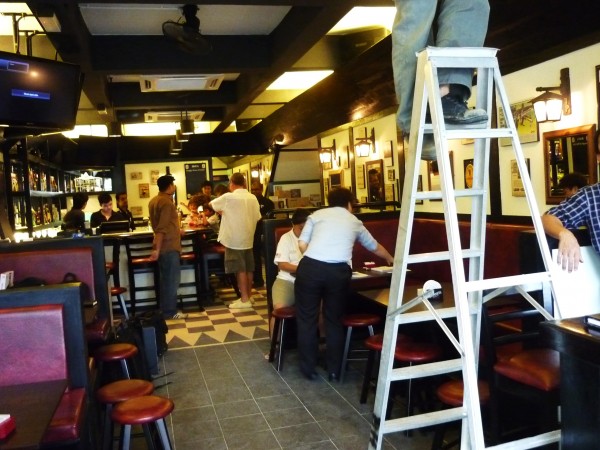 To celebrate the opening, its happy hour all day & all night until the end of September on ALL taps – Tiger, Guinness, Heineken, Kilkenny, Strongbow & Paulaner! Booya! 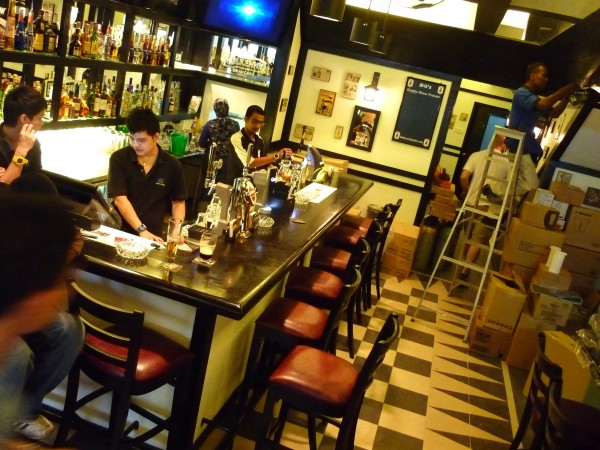 This where i rather be at – 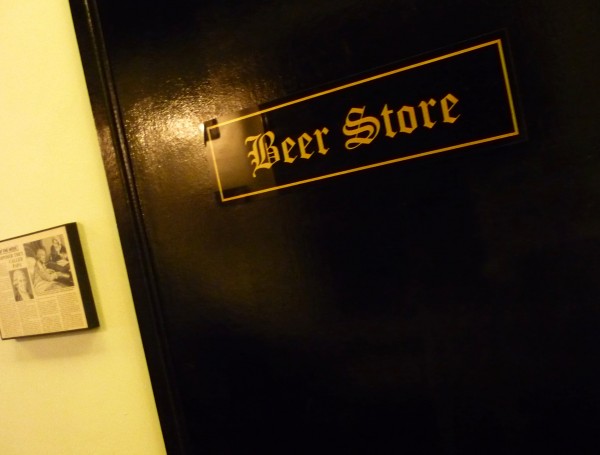 Just throw in some bacon to me every coupla days

To celebrate the opening of the fourth Sid’s Pub @ Plaza Damansara we’re doing Happy Hour ALL DAY & ALL NIGHT until the end of SEPTEMBER 2010 on draught TIGER, GUINNESS, HEINEKEN, KILKENNY, STRONGBOW & PAULANER

Boozepimp of the Month is a new monthly column that will feature respectable players in the alcohol industry. These are interesting personalities in the scene that have made a significant impact, or have the potential to do so, or would like to do so.

(If u know of a candidate, u can lemme know).

It will culminate in the ‘Boozepimp of the Year’ Award at the end of the year. Besides the glamour of being da big-pimp mac daddy, he/she will receive several bottles of my special strong cider, Baad Apples™. 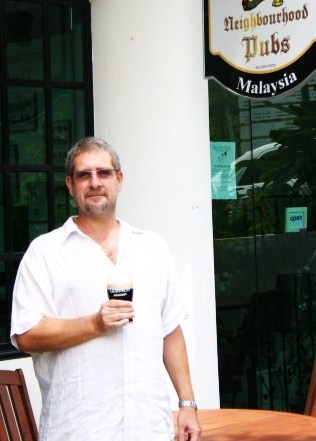 Our first guest is Geoffrey Siddle of Sid’s Neighbourhood Pubs. He’s the owner of a chain of English pubs than began very low-key about three years ago in TTDI in Sept 2007, and has now expanded to Bangsar and Kenny Hills. A fourth outlet is right now being created in Damansara Heights, KL. 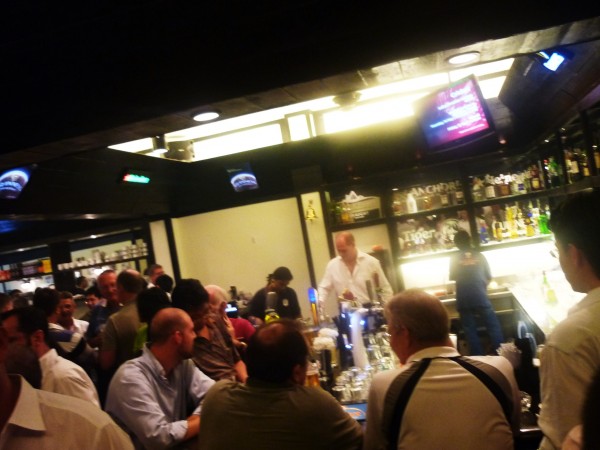 The name Sid’s is actually from his surname, Siddle. He’s 42, married with three kids, and lives in Bangsar.

The long-term-inclined and forward-thinking Geoff is a genuinely friendly and sincere guy. And unlike some publicans who dont hangout & drink, Geoff’s basically one of the boys. He most def loves his Guinness!

Interestingly, Sid’s TTDI (already featured here – the food that is) is the biggest-selling Guinness outlet in Malaysia. Sid’s recently received an award from the Telegraph in the UK as the most “Highly Commended British Pub”.

It’s one few joints that have ALL-DAY happy hours, starting from just before noon till 8pm, and sometimes beyond. Solid! Prices of drinks are affordable, making drinkers come back for more all d time. 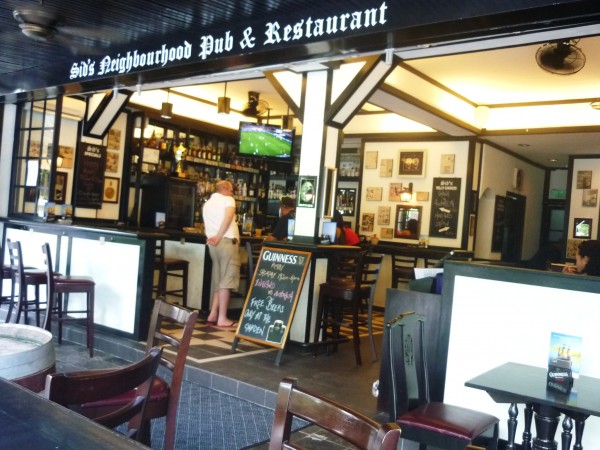 1. So, how long u been in Malaysia and watchu been up to here?

I’ve been in Malaysia for thirteen and a half years. I first arrived to set up a cosy little winebar /cocktail bar in Changkat Bukit Bintang called “The Long Island Iced Teahouse” (way back in 1997) and was there for a couple of years.

DBKL thought it time for me to move on so I joined Finnegan’s Irish Pubs to help them with their expansion plans.  I was involved with their outlet in Desa Sri Hartamas as well as their Sultan Ismail branch.

2. And whats your F&B background?

I left Finnegan’s and wanted to set up my own chain of pubs!

4. What is the concept or feel u like to portray via Sids?

I believe the best entertainment is the “craic” created by people themselves. You’ll notice that in Sid’s Pubs the music is barely audible and the main noise is the general din of people chatting & laughing. This, as in most pubs in UK, is what I had hoped to have achieved here in Sid’s. The design & decor, along with the menu, is typically British.

5. And why do u think Sids has been so successful?

I truly believe there is a large number of like-minded individuals out there who think along the same wavelengths as I do; the outlet must be friendly, low music, lights turned up with good quality food & drinks at affordable prices.

The food menu is typical of any good quality pub back in UK. 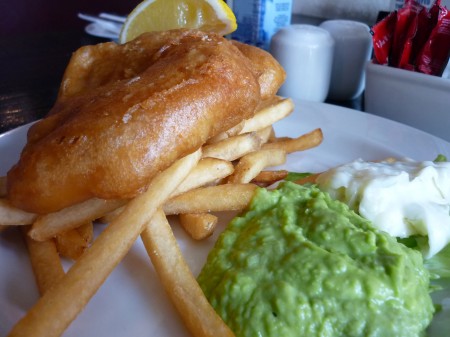 The more popular items on the menu must be the “Pigs-in-blankets” (pork sausages wrapped in bacon), genuine “Cod & Chips” and the “Pork Vindaloo”.

The most popular drinks in the house must be Guinness draught, Tiger draught, Strongbow cider, Snakebite Blacks & the house wine.  Being a proper British style of pub our draught beers are definitely the choice of the masses.

9. What do u think of drink prices generally in KL?

I think generally the prices are high.  A lot of the time this is beyond the control of the individual outlet as they are supplied drinks from the suppliers who have to charge a higher price due to the massive alcohol “sin tax” here in KL.

Some outlets go over-the-top by charging ludicrous prices whereas some, like Sid’s, would rather have a lower margin but aim for the higher volume. 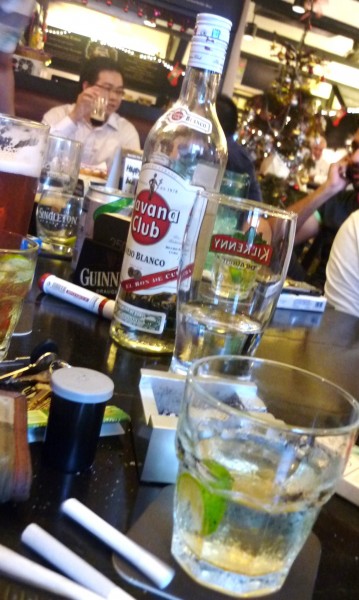 One of my many D.I.A. drunken sessions at Sid's TTDI

10. What do u like or dislike about drinking outlets in KL?

What I like about the drinking outlets here is the majority have a really nice blend of customers, normally with a good selection of drinks.  If you’re into the music scene there’re a lot of choices.  My main dislike about a lot of the drinking outlets here is the lack of ventilation.  I think that when the smoking ban happens a lot of the pubs will have more appeal, also the toilets………

If you have a concept you believe in, then be patient and let it happen, there will always be like-minded people around.

12. Tell us about your future plans regarding Sid’s pubs.

The plans are to have Sid’s Pubs in every nice neighbourhood in Malaysia – so watch out, there may be a Sid’s Pub near you soon!!

Why have only one drink when u can have two?