A German joint has taken root at Megamall in Midvalley. Brotzeit (2287-5516), originating in Singapore, is a restaurant-bar with an interesting menu and a variety of beers.

I checked it out with food junkie Bangsar-bAbE, as we’ve decided to pair up as a tag team for reviews – she’s d food specialist, me d booze. I like both food n drinks, so its a sweet deal! 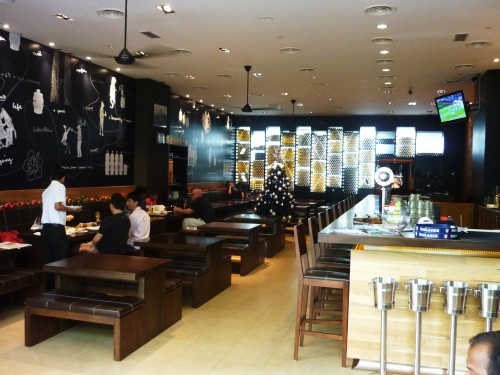 A long bar as u enter 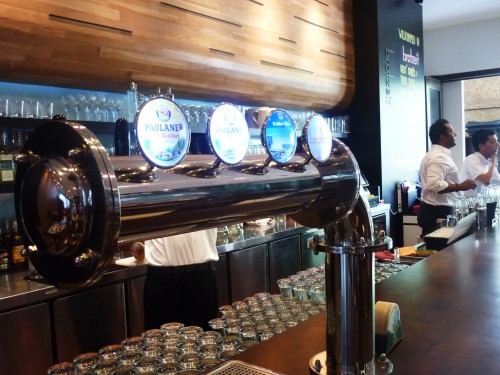 We started brunch with some ales, since i’ve kinda eased back on lagers. I went for one on tap, Paulaner Hefe Weissbier, a wheat beer (5.5%). As with all wheat beers, its pleasant n easy-drinking. 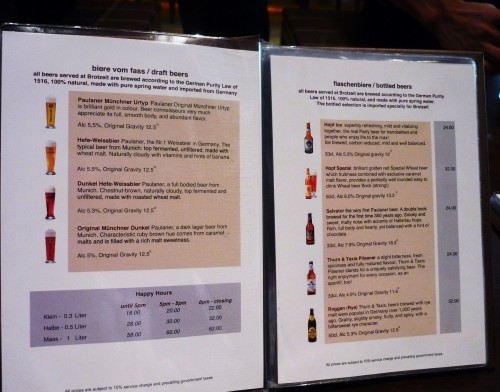 Some of the German brew available (click to enlarge). Note that prices are not nett 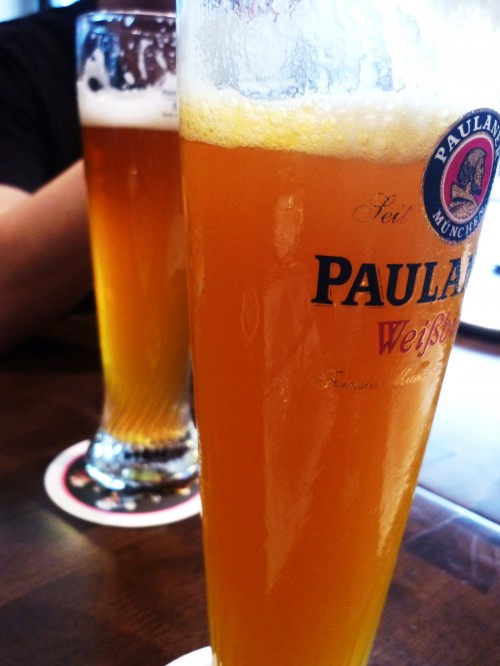 Sue Lynn decided to try for a beer cocktail. She had an affensaft – weissbier with mango. Turned out good. Fruity, and importantly, very palatable, so u drink fast. The banana mix didnt turn out so well.

To start d munchies, we had a spicy bacon pizza, a crispy one with roasted bacon bits, onions, cherry tomatoes & chilies. The base is crunchy, so its more like a bacon biscuit. A good combi of tastes, with a spicy buzz to go with that beer. As its bacon, there was a scary layer of oil under the pizza. 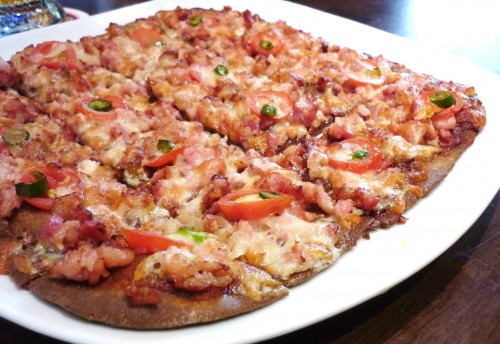 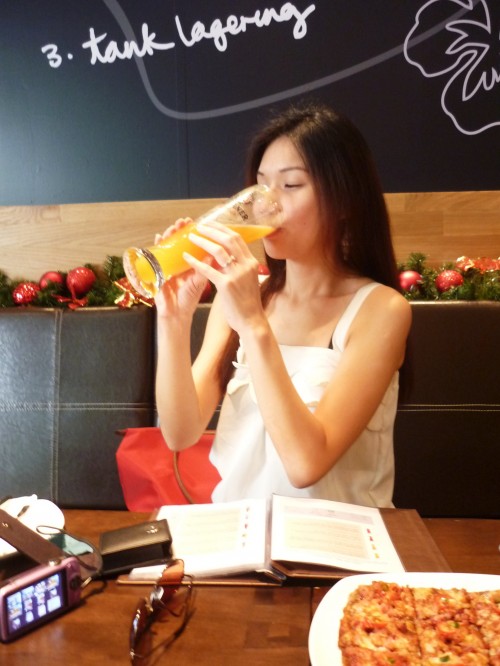 I moved on to a dark wheat beer, Dunkel Heffe Weissbier, which was perfect timing as a shitload of pork ribs appeared.

It was great stuff. Still moist, with a well-marinated outer. Fortunately the meat doesnt fall off the bone, coz dats for toothless sissies. The Brotzeit guy with us wasn’t certain, but i reckon it’s roasted. At $102, its steep, but enough for a few people. 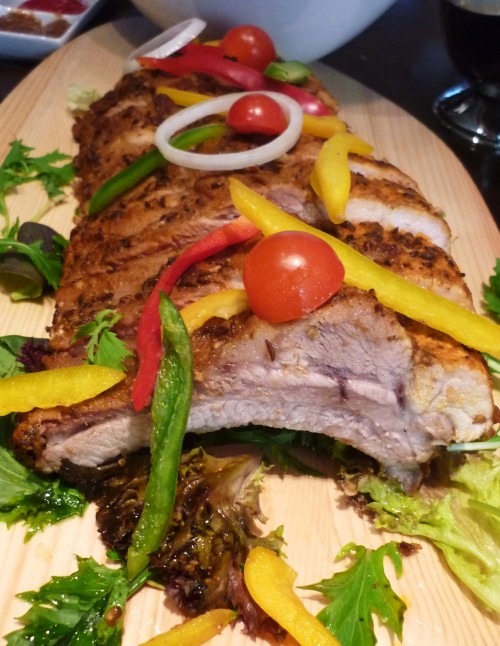 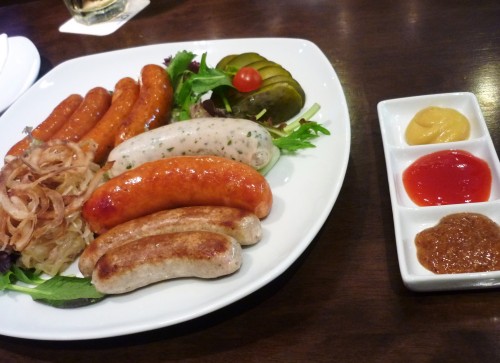 More meat in the Wursterplatte ($89.70), a combi of garlic sausages, spicy chicken, pork, and mini pork-cheese. And sauerkraut of course. The garlic one was d most interesting, as it had a distinct twang compared to same ol sausage flavours. 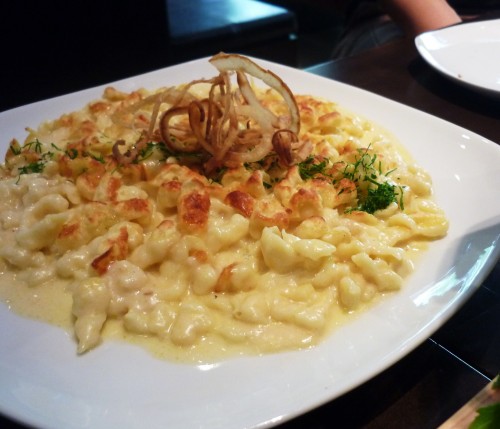 What i thought was macaroni was Käsespätzle ($39), homemade egg dough with cheese, a Bavarian thing. Rich n cheesy! Kinda milky too. Best if shared, coz tough to finish.

The massive pig-out ended with Apfelstrudel = apple strudel ($25.30). Any dessert with ice-cream has my vote, and this one is good stuff, with juicy apples inside, and a flaky outer, combined with almond-topped vanilla ice-cream. 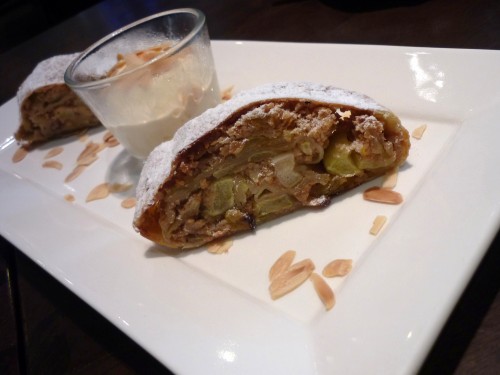 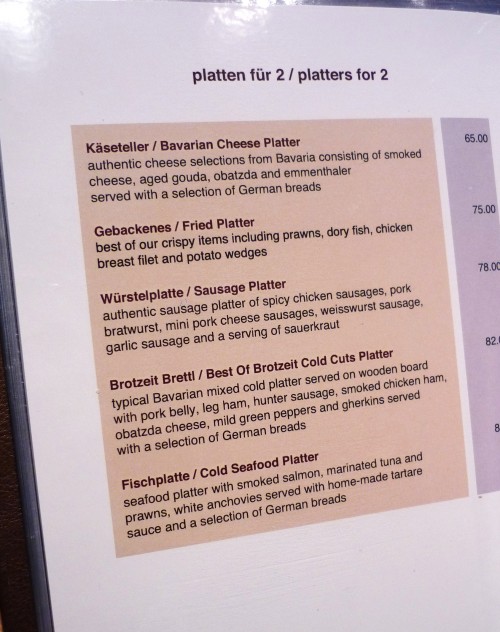 Got well-stuffed. We hardly made a dent in the menu.

Only tried two beers, so hopefully will swing by someday to test more.