Did a major tasting session with my current favourite liquor, rum. In the afternoon, just to make it more challenging. And it wasnt even my birthday. Thanks Suzanne!

Rums are complex, unique spirits, but there tends to be very limited variety here. Everybody seems to only know Bacardi of course, which actually is a very basic, commercial rum. There ‘re shitloads of styles and varieties that come from the Caribbean islands, the home of rum. 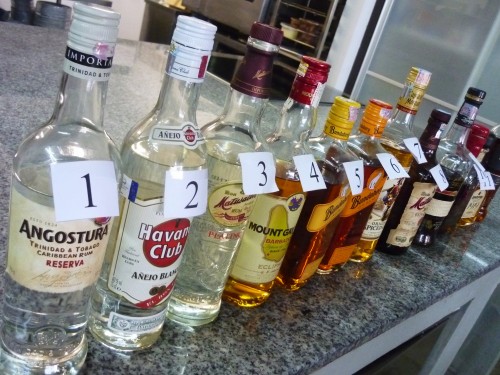 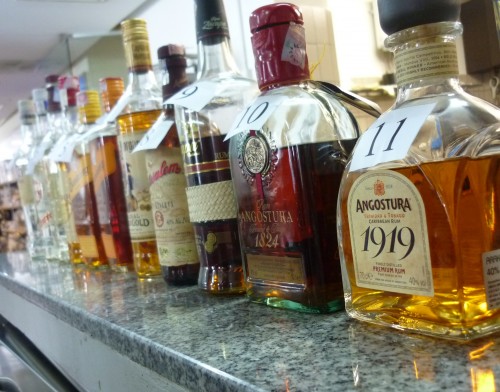 My favourite are the aged ones. Superb.

The shootout took place courtesy of Flavours magazine, who needed my ‘expertise’ as one of the tasters for its drinking article on a dozen popular rums. A dozen! Nice.

The last one i did with them was this tasting for wines below $80, which was fun! Coz i tasted 28 wines. 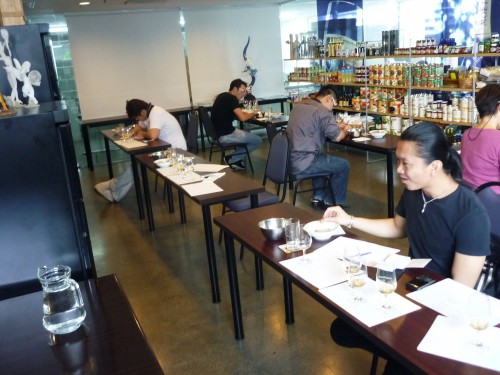 I was a lil late, so had to catch up on the first few rums, which were white. All taken neat of course, and blind.

Numbers 1 to 3 were pretty straight. Low on flavours, not very complex. The Angostura Reserva was pretty vodka-like, and i scored it 8/20 (points – max 2 for colour, 6 for nose, and 12 for overall taste, for a max score of 20). 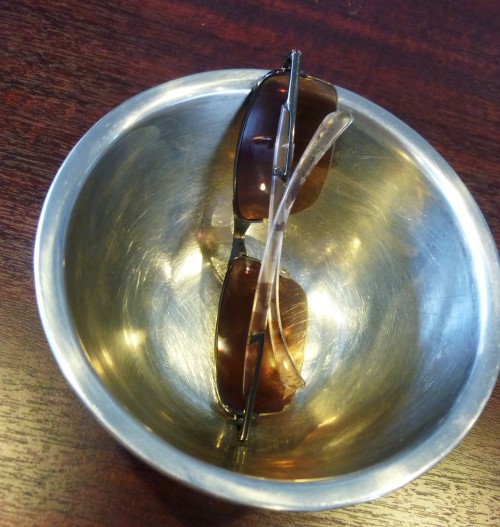 Dats one bowl i sure would never use, except to park stuff

The Havana Club Anejo Blanco (Cuba) scored 8 as well, with a sweetish finish. The first white that i downed was number 3, Matusalem Platino, well-rounded and a 10/20 for me.

Then come the gold rums, starting with the Mount Gay (Barbados, scored it 12/20), which has a sweet start but is harsh later. With a nose of tequila and a sweet-spicy taste, the Bundaberg (Aust) is a little more complex. 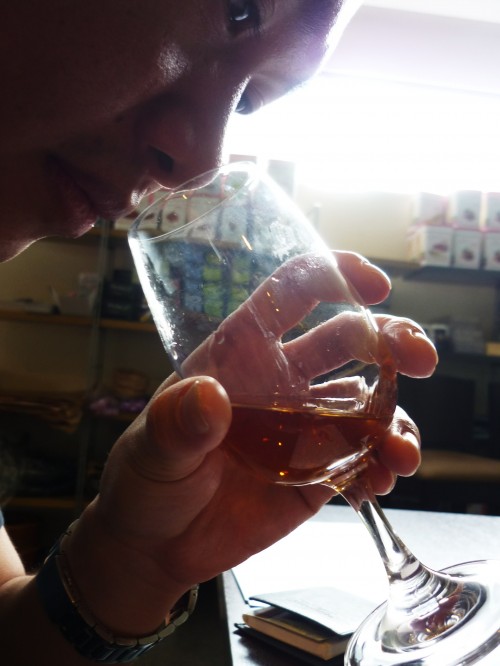 Nose the dose. The man, Junior, mixologist from View Bar

By now, am starting to buzz. Just to make sure, the next rum is the Bundaberg Overproof. I didnt know that of course, and wrote “Boom! on the tongue, strong alco flavour start to finish. Smells better than it tastes!” Haha. Waddya expect from an an ass-kicker at 57.7%.

Rum number 7 turns out to be Captain Morgan Spiced, which i used to like. Its got a nose of caramely-spice, with tastes of cinnamon & spice, vanilla, fruit, but with a harsh n boring finish. These days i dig Captain Morgan Black Label. Killa. 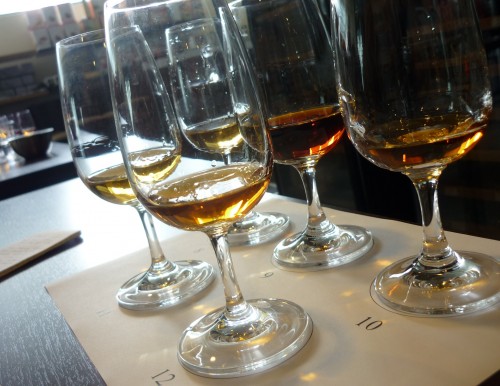 Out come my highlight, the dark rums. Yea!

It began with the Matusalem Reserva, which gave me hints of tobacco n spice, and was a lil harsh (12/20). 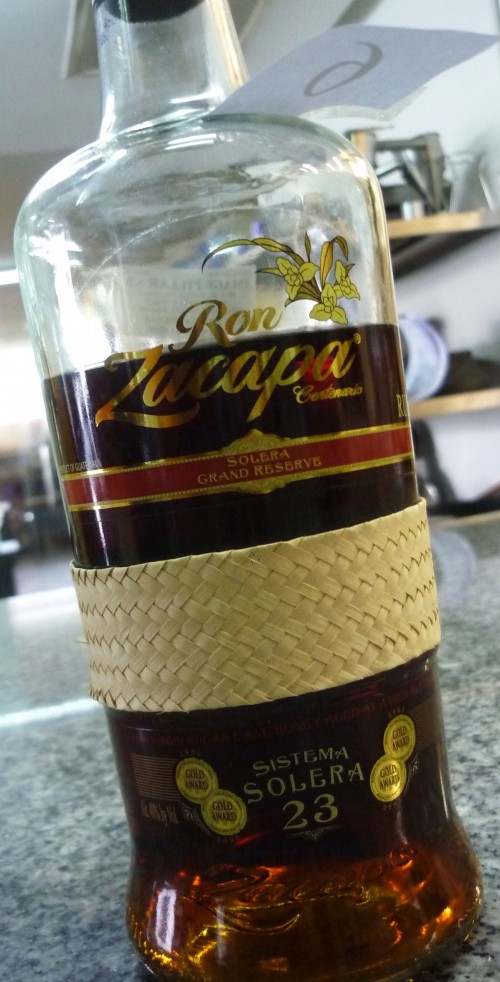 Then i hit the Ron Zacapa Centenario, a rum from the high altitudes in Guatemala. It’s from rums aged between 6 and 23 years. Taken neat, it’s almost honey-like sweet, consistent throughout, some woodiness, good vanilla too. Fruity, velvety and well-rounded, it would be great on the rocks. Scored it 17/20.

Followed by the Angostura 1824, which is from Trinidad. A nose of leather, spice and oak. Taste: chocolaty spice, very smooth, silky even. This is a rum with depth, spiciness, and some complexity. Extremely smooth taken neat, like a good Cognac. It got a high score from me, 18/20.

The 1824 is aged in charred American oak bourbon barrels for a minimum of 12 years. 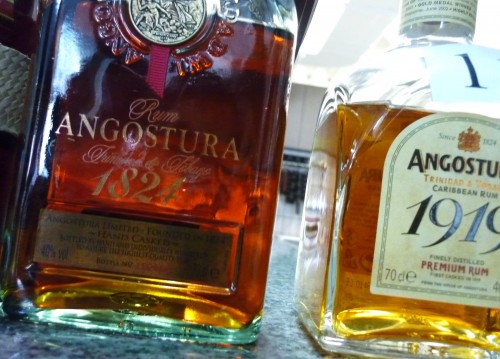 Rum number 11 was the Angostura 1919, with a nose of leathery musky cologne, and taste-wise, it’s very spicy, roasty caramel; oaky n spicy finish. Not the smoothest, but an interesting complexity. Would drink it again (17/20).

The final rum – Angostura 7 Years. I found the start to be very harsh, and too goddam spicy for me. Might be good with ice n water (14/20). 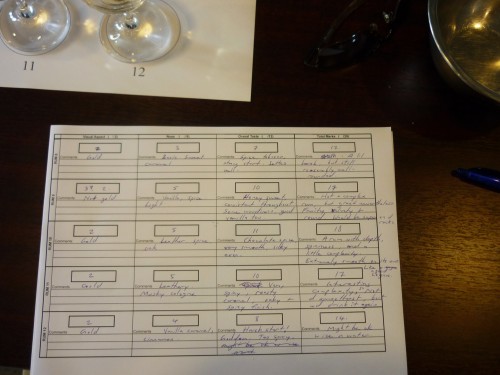 It was probably the most exciting tasting i’ve been to. Rums are fun, and many of the aged, premium ones are as interesting as cognacs and whiskies. It aint just for pirates.

But u can get your pirate name here. Mine’s Wayward Dizzy-Eyed Pignut. Watdefuck’s a pignut?

Man, these things should happen monthly! Or i should just live in the Caribbean.