Bumped into this music video, which basically disses mixologists and cocktail geeks. Coz these boys have no time for fancy shit and fancy bartenders. Nicely shot. And amusing.

The frustrations of the common man.

An ol buddy (Bala, from the Night Train Incident) yesterday brought up a line from a cowboy movie dat we liked way back, Young Guns II. It goes sumtin like “You wanna see scars, I’ll show you scars.”

Reminded me of my share of scars n shit. Nothing major.

Lemme start from the top – scar on top of head (hit by a rock, courtesy of my cuz) (No known brain damage)

Damaged teeth, lower jaw (fell down a flight of stairs as a kid)

Bee sting on nuts (KKB. No permanent injury, but had interesting temporary side-effects!) Various leech bites too at same spot 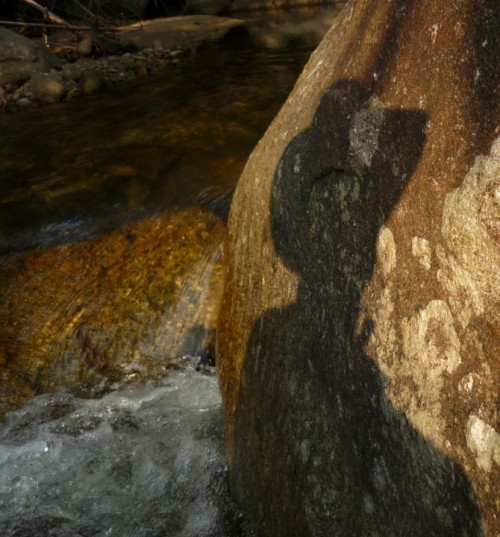 KKB is home to some naughty bees

Dislocated rib (my own superbike crash, KL). The rib still sticks out. Haha

Serious allergic reaction to bee-sting, Gunung Api (Pinnacles), Sarawak. (since then i’ve unfortunately become hyper-allergic to bee venom, and have to carry an adrenaline syringe when in d vicinity of forests) 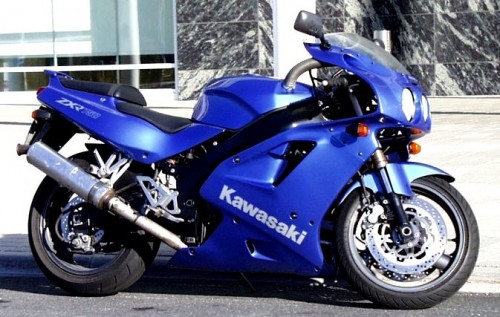 Decompression in hyperbaric oxygen chamber at a Naval Base. Diving incident (no permanent damage)

Hepatitis from consuming contaminated food, Kandahar, Afghanistan. (Fortunately it was Hep A, meaning it comes for 2 weeks, then it’s gone for good. Unfortunately upon my return i cdnt drink for a month!)

That’s it for now, I think.

You know, i’ve done other seemingly riskier shit than above, like rock-climbing, white-water rafting, sky-diving, caving, protesting, bungee, mountain/river trekking, etc without any injuries at all. Well, no serious ones anyway. Strange. 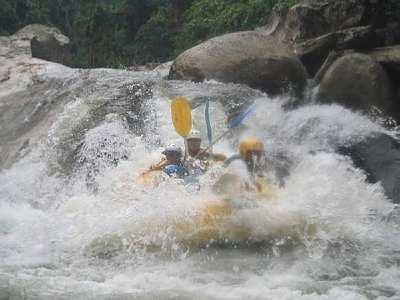 There was once i contemplated the problems and pain injuries have caused me, and  i envied geeks, coz they dont suffer from any injuries. At the most, their specs might scratch their forehead or sumtin. But d envy only lasted like, 1/10oth of a second. Doin shit regularly is fun.  These lil injuries definitely aint gonna stop me from loving bikes, sports and d great outdoors. No pain no gain.

Life is short. Squeeze it.

Well, just a few. But there’re lotta others out there.

They think pets are for human entertainment.

Most of them haven’t reflected about what kind of people they are by confining / abusing innocent beings. They’re in denial, not wanting to face the fact that it’s as simple as right and wrong. Keeping pets merely for YOUR entertainment is…… how bout WRONG. 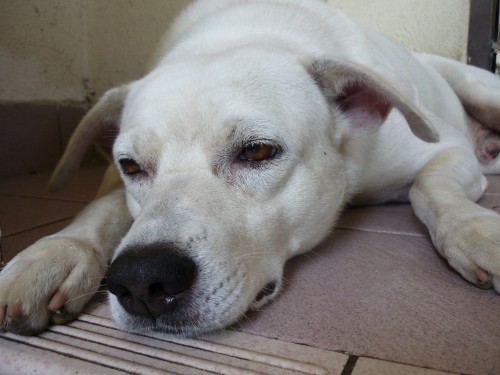 I have a dog, the legendary Homey, and i treat him well. He gets what he’s really, absolutely dying for daily – his running-free walks out. And pussy. He somehow scores reasonably regularly. He does runaway, but always comes back.

I didnt cut Homey’s nuts off. For one thing, i feel genital mutilation is cruel, killing an animal’s primary and some say sole reason for existing (ie, breeding). I feel it’s more cruel than letting stray puppies live.

There are animals that actually die just so they can reproduce. Doesnt that give u a hint on what it means to their ‘pathetic’ lives?

And second, so what if he screws, and some bitch has kids? They might die, or they might live (like Homey’s last bastard, Kayote); and get to breed. Being given a chance at life is better that not existing at all. Who am i to decide they don’t get to live?

And third, who am i to interfere in Homey’s natural instincts? He’s a goddam dog. If u don’t like what dogs do, don’t get a dog. Is anyone forcing u to get a dog, then cut off his nuts? 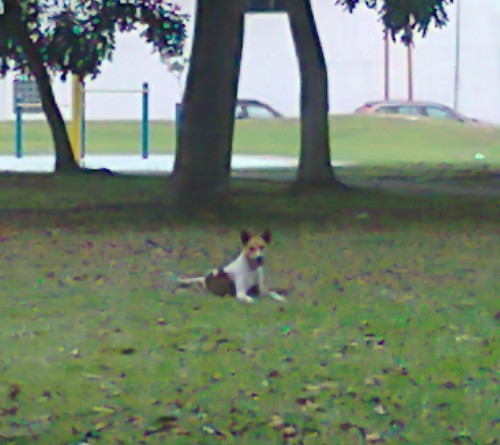 And i don’t make him do stupid tricks for my pleasure. Or put on goddam clothes to make him more ‘human’. He will never be human! Get pregnant or go buy yourself a goddam kid from Thailand if u wanna play dress-up.

That’s the ultimate expression of “The damn animal exists to serve me!”

The only tricks my dawg knows is “come here” and “git out!!”.

I have never referred myself as the owner of Homes, but rather caretaker. How can u OWN a life? U could own a fucking chair (coz it’s lifeless), but you can’t own an animal. It’s a free spirit.

Everyone is born free.

And just coz u paid for its trafficking (ie, import), don’t mean u can actually own a LIFE. Who are you suddenly, God?

U don’t even own your kids’ lives. The only life u own is yours.

That’s why maid abuse and maid slavery and human trafficking goes on. People feel… “I OWN the maid. I paid for the bitch, so why not do as i please to her?” People like that are a dime a dozen. Hence, they abuse their pets/maids without even realizing it, or never stop n think that, “Maybe this isn’t right.”.

Or “What is the real, true purpose of me confining this animal? For its benefit, or MINE?” If only people actually used their brains and thought about these things.

They refer to the animals such – I OWN a tortoise or I OWN a lizard or a fish or watever. That’s the thing about most people. It’s all ME. 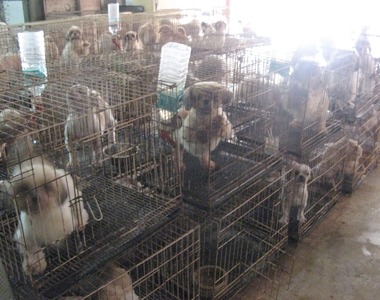 But what definitely takes the cake is confining an animal in a aquarium or cage. I really don’t know how humans can do that. That’s imprisonment and torture in its purest, undiluted form.

It’s been calculated that this is equivalent to putting you (human) in a space of a phone booth, feeding you in there, and occasionally letting you out for rec time, if at all. See if u can handle that.

No, it’s not cool, however ‘funky’ the animal is. Really. It’s dumb. It’s pure selfishness. Egoism at its prime.

Animals are not some stupid display item.

Why is selling pets even allowed?? (There’s even an FB page now against this)

If u really want a pet, dont buy. Get your friends’ extra puppies or kittens, or adopt. And forget the other animals. The more exotic, the more ignorant and egoistic you probably are.

The worst are of course people who keep wild animals, like snakes n shit. And of course, birds. I envy birds, the distances and heights they can travel. 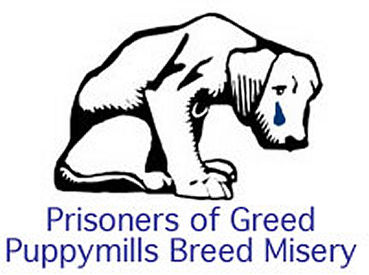 A friend gave my ex-housemate Sam a pair of beautiful lovebirds once for his birthday. Immediately i was like, “Watdefuck is this shit?!” I was pissed at the ‘gift’.

The next day, i convinced him it was stupid, and to set them free. Thankfully, he’s intelligent, so he said ok. So i opened the cage door. One flew out immediately, and waited on a tree close by. The other was reluctant.

The freebird starting singing. And signing, sweet tunes (they never sang even once before) . The other eventually flew out, to sit next to each other.

They sat together on the branch, and both sang loudly and melodically for us for 10 minutes. And then suddenly took off like lightning, never to come back. Me n Sam smiled and nodded at each other. We felt liberated too.

A coupla months ago, me n my bro opened up all the bird cages at this fancy-ass restaurant in KL, A Passage Thru India, as we left the place. Some birds escaped. Haha. Serves those idiots right. Confining birds n shit. 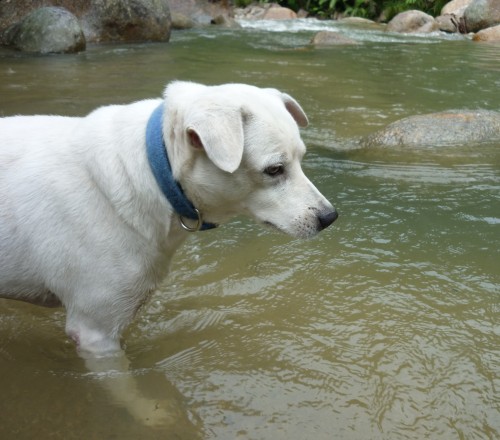 And I would do it again. At the most, I’d get arrested for vandalism or some shit like dat.

Who knows, they might give up their fucking stupid ‘decor’.

Well, animal rights have a long way to go on this planet. If u buy them, they’re yours to be used n abused, as you please. No one can stop you.

We’re the supposed ‘prime species’. Prime my brown ass. We cant even stop torturing n killing our own species, let’s not consider other ‘lesser’ species. Humans should learn from animals, not the other way around.

But of course, we’re pretty damn good with screaming about animal abuse on the Net or FB. People goin ballistic with their comments, gettin nose-bleeds all over their keyboards n shit. Without lookin in the mirror first. They might see an animal abuser.

I have more respect for someone who gives a dog a kick to chase it away than some of the pet-owners i know. At least that sorta abuse is one-off, not 24-7.

Those cold dog catchers dat we bitch abt? They’ll probably tell you d same thing some of my friends have told me – “They’re  domesticated animals, meant for humans. So we treat them so.”

Let’s try to be less less selfish and egoistic. The less ego u have, the less u’ll think about what YOU want, and the more u’ll respect an animal for what is it – a free life. Just like you.

Eight years ago i wrote three feature pieces in The Star about zoos; one was on how silly zoos are. On how they shouldn’t even exist. “But kids wanna see animals!” Shaddup! Put on Kung Fu Panda.

Last year The Star did a major piece about it, but unlike eight years ago, this time there was more acceptance. Society is evolving.

To me, zoos are nutin more than voyeuristic animal torture chambers.

People also freak out big-time about shark fins these days.

Am also against trapping and confining endangered species in a ‘research facility’ coz they’re endangered. Let them go extinct! They wouldn’t know better anyway. So what? We fucked up. Accept it and learn. Why torture them for that? U think the last rhino on earth really knows/cares dat it’s the last?? It wdnt give a shit about dat, besides trying in vain to get laid. 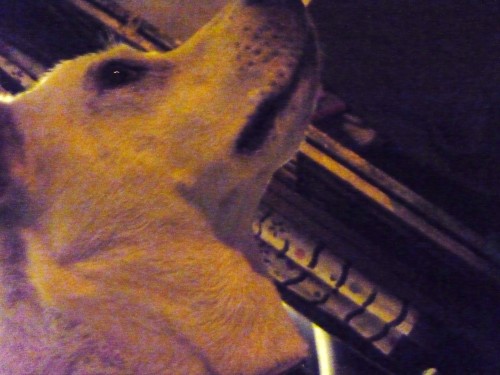 Homey at his house party

I guess mainstream society still hasn’t evolved to the level i’m talking about. These views are quite radical, and probably  most people reading this are conservatives. But am 100% sure someday we’ll look back and think “We condoned shit like that?? Daaamn. How primitive.”

I dont expect many people to support these views, understandably, as it wd mean accepting d fact that most of us are ignorant, self-gratifying animal abusers.

We all learn all the time. If we don’t, we wdnt have progressed. Progress involves listening to alternative views n accepting what could help us be better.

Stop before u buy an animal. Ask yourself – am i doing this for me, or for the animal? (I’m willing to bet money that 99.9% of the time, its for you.)

So think twice before you u go out n purchase an animal. It’s not a product, or a show-off-to-friends toy; it’s a life.

Received my Organ Donor Card today. If i die, my parts will live on. Haha 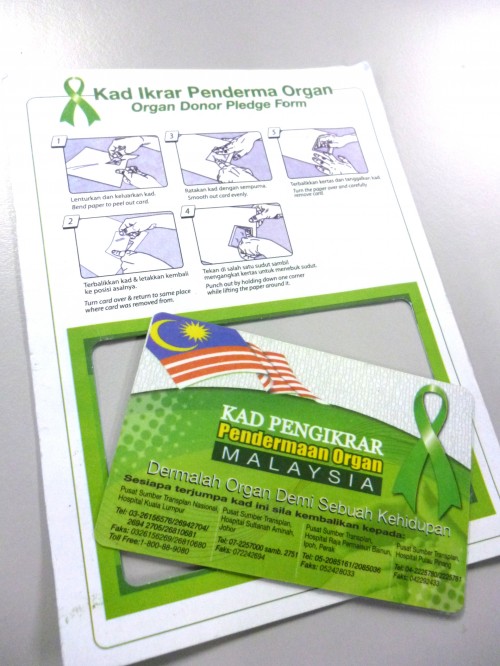 Do it. Don’t assume u gonna live forever, altho dats human nature/ human arrogance. Go to A Gift of Life now. Fill the form, and the card that u should carry on you at all times, will be mailed to you.

It only takes five minutes. And it could make someone who’s now in misery and suffering on a daily basis, happy and free for the rest of their lives.
I don’t think it’s a great thing to do, merely the logical one. In fact I feel it shd be d other way around. You shd carry a card if u DON’T want your parts used.

Our organs originated when we were in our Mum’s belly, a miracle and gift from Nature. Just pay it forward now.

If there’s one thing we’ll never know, it’s when we gonna checkout. 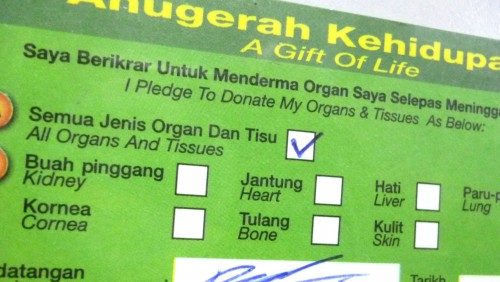