Feelin like a space brain one more time tonite! 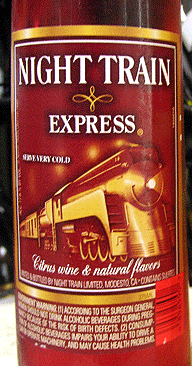 Makes u feel like a locomotive engine. Cant clean drains tho

Yup, d one & only Nightrain Express! If u know what dat is, u an alconnoisseur. And ur sure to have your own Night Train incidents!

As u can see rock n roll bad boyz Guns ‘n Roses even dedicated a song to it.

As guitarist Duff said “We had no money but we could dig up a buck to go down to this liquor store. It happened to have this great wine called Nightrain that would fuck you up for a dollar. Five dollars and you’d be gone. We lived off this stuff.”

James Brown did one night train tune too, maybe as a tribute to da shit that has probably killed many people around d world. Not coz its toxic (well, if u down a few bottles u could probably die), but it gets u THERE in a hurry, sometimes unexpectedly. 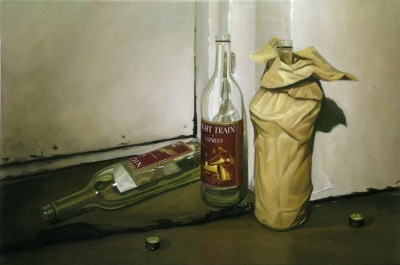 It’s a fortified apple wine from Modestos, California, by E&J Gallo. It’s ABV is 18% (hence fortified). I have no idea why its red tho. Maybe gasoline. But it’s not banned here or in the US, so sallgood.

It falls under the category of a bum wine aka street wine aka hooch aka wino wine aka ghetto wine aka liquid crack.

In college, we lived off this stuff too. It was $6.50 a bottle (easy twist-off cap) when I bought my first. My most heavy, off-the-rails, liver-shredding, train-wreck experience ridin d Train happened in downtown KL, during my college days.

There are three bottles of Train in d car. With GnR bouncing in d speakers, we promptly destroy them (one bottle each. Not recommended. Cos half always gets u blazed) within 30 minutes, and start to walk along Sultan Ismail to HRC, obviously smashed by then. I need to piss, so I casually unzip, whip it out and begin release da pressure on d hood of a car that was parked at the bus stop there.

This is like 8pm – heavy traffic along Sultan Ismail, but of course I dont givafuck. Senget.

Bala n sum other niga waited. Suddenly d fuckin car I was pissin on honks! I was like..  dafuck! Dis car got an anti-piss alarm or wat.

It was probably ‘wat’.

It horns again, coz I continue to piss on its hood. Watdefuck man. Chill

So I start to shuffle sideways to the driver’s window (still unloading of course, drank a whole bottle), so now am like, sprayin all over d door n shit.

I look at d other two drunk cats, and they just fuckin laughin man. They maintain their distance.

I try to peer in, but can’t see much. Either the windows were fogged or d good ol Train was makin me blind. I can’t recall to be frank.

Dude who was in d car never appears or winds down d window or runs me over. Weird.

Wonder what was goin thru his mind. He sees these three dudes swaying past, one approaches his car, unzips, n starts to piss all over it.

He must have assumed we were stone-cold gangbangers.  Yup.

Either way, he/she leaves us alone. Serves u right for parking in a no-parking zone. It’s a goddam bus-stop, fer fucks sake.

Dat was your ticket, bitch.

Anyway, dint matter coz I give it a shake, zip up and continue zig-zagging with d boys to HRC. We briefly discuss d pissing incident, laughing heavily like drunks do. 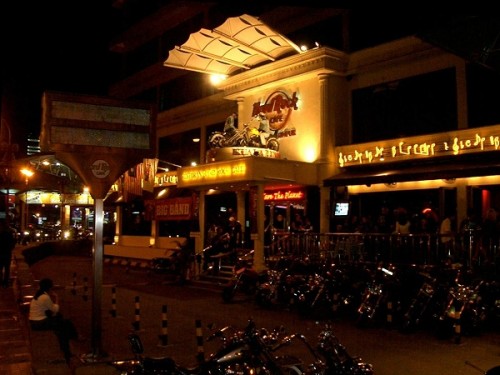 Destination of the three train riders. Hey, at least we made it there

We get there, order three bottles of Guinness plus a huge hamburger each. The Train somehow made us peckish. Maybe coz we swallowed it on empty stomachs. We take a sip of d drink, a bite of d burger (d goddam patty jumps out n hits da floor, son of bitch). I was like, fuuck!

I look at the empty burger buns, and walk out.

My sis n her friends show up to HRC to party. They laugh at a body lyin on d stairs of HRC. People were like steppin over d body n shit. One of my sis’s friends says “Look at dat rogue! Haha! Not even 9 o’clock and he’s gone!”

My sis laughs. Then takes a second look. She says “That’s my brother!!!”

So my sis (whose car I borrowed dat nite) finds me, lying there, gone.

I only recall staggering out of d bar. I needed space. The Train had pulled into the station bitch.

She was shocked. Probably pissed too, coz now she has to drive me (and Bala and sum other niga) back, in HER car that I borrowed, and cancel her plans to party.

I vaguely recall lying in d back seat of her car, she being pulled over by cops for going up a one-way (she must have been hit by d Train fumes in da car), and then finally reaching home. Old man was standing at d door, obviously curious watdefuck were we doing back so early on a Friday nite, and why was I staggering.

He didn’t get d explanation he was waiting for from me. I brush past him, like he wasnt there, with my shoes on, and go to my room. Fall on d bed n crashed. Woke up next day with my shoes still on.

Its sister drink is Thunderbird (aka The American Classic), the white version. Not as good. ABV is 16%. I recall buying T-Bird with my hombres on hot n sunny Saturday afternoons, getting a pack of ice from the mamak, filling it with dat shit, and downing it with a straw.

Goddam u T-Bird, why dont u taste as good as d Train?

Have had many interesting experiences with the Train. Always had one back-up bottle under my driver’s seat. Too easy. Leave house stone-cold sober, arrive 20 mins later at destination wasted. Party.

Have also passed it to friends in another car to have a sip, while driving on da road. Haha! Stunt driving n shit. Any drivers who saw it must have been ”What the..!”

But havin a whole bottle of the Train is a for sure a one-way ticket – “from sober to stupid” (as bumwine.com elegantly puts it). When u have it, do as the label commands: “Serve very cold” or die. The first sips might be a lil rough, but later swigs, as da Rastas say, is airay!

If u ever need an emergency operation or a tooth pulled out, the Train makes a good anesthetic. Wouldnt recommend drinkin d Train on an actual train. There might be a hijacking incident.

The Night Train is a good-tasting drink tho. U just gotta show it sum respect. Unfortunately it’s gettin more difficult to find – wanted one for d blog launch to pass around. Price is about $20+ i think.

U should have it chilled, but warm is actually pretty decent, and u gotta drink straight from d bottle, none of them fuckin “I’ll have mine in a glass please” crap. Take large swigs, and avoid doin d whole bottle yourself. Share da luv.

And have a good ride!

And I’m looking for some

I’m on the Night Train, and I’m ready to crash and buuurnnn…

Every alco has Night Train stories. Trust me.

If u  have one, u can post yours at the comments section for a laugh! 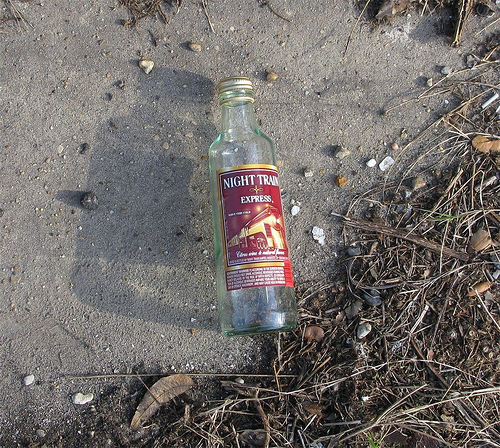 If u see dis, chances are there’s a body around

15 thoughts on “All aboard… the NIGHT TRAIN!”