The Star ran an article a coupla weeks ago, claiming Malaysia is in the Top 10 for alcohol consumption in the world.

It quoted a deputy minister Heng Seai Kie, saying things like we’re alcos, bla bla bla. The journalist and editors just took it as gospel and ran the story, creating all sorts of reactions and consequences.

Maybe it’s part of an excuse to raise the tax on alcohol even higher this October, then probably we’ll have the highest tax in the world! 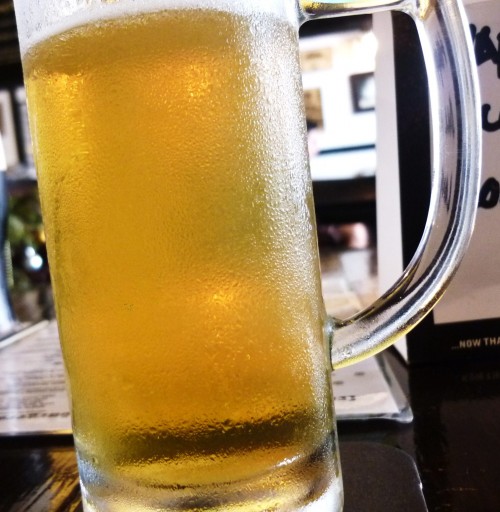 I wrote a letter to them on behalf of Alcon (Alcohol Consumer Rights Group), telling them the real situation, and giving them links to actual data.

Unfortunately, they didnt publish the letter, nor did they run an appropriate clarification. Biasa la. Screw up and dont wanna admit. So i guess its up to me to clear the air, once and for all. (The link to the letter is here.)

How dehell did we suddenly become Top 10?

It was based on some obscure report (available online but i wont bother to link) by Consumer Association of Penang. CAP’s president SM Idris is kinda militant alcophobic.

Must have had a bad experience.

Either way, the grandad aint gonna defend drinkers’ rights, thats for sure. If it was up to him, drinking would be illegal.

Anyway, according to WHO’s (World Health Organization) global report, the average consumption on Earth is 6.2 liters of pure alcohol per human per year. Malaysia’s annual intake in merely 0.82 liters / person. (The Star said 7 liters!) And WHO also states that 97% of Malaysians are abstainers. WHO’s report on Malaysia here. 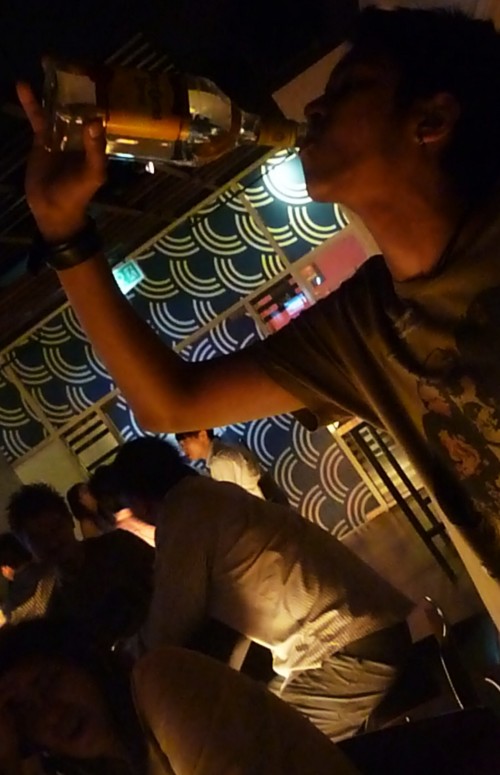 Malaysia might be ranked low, but we sure know how to party eh

This Top 10 bullshit has been around for a few years. It’s a myth that i hope is finally busted.

Hence, the need for Alcon to enlighten journalists, public, NGOs, government, etc. And to push for a freeze on taxes until 2020. Pls join the group as we need support. And suggest to friends too. 5,000 members would be a good figure.

Good news is Alcon will be having its official launch early next month, and all members are specially invited to d party. Watch the group page!

We did it. The campaign against the proposed tax increase on booze seems to have succeeded. According to previous media reports, the government was planning to increase the duties on alcohol. But on Friday, the Budget proposal didn’t do it. Cool.

When i heard about the government’s plans 2 weeks ago, i decided to form sort of a consumer’s union. So Alcon, Alcohol-Consumer-Rights Group, was born. That was on a Tuesday, the day the lightning campaign began. 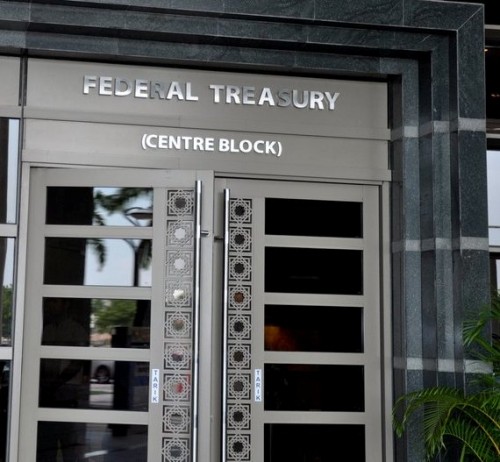 Would rather rob it

We ended it last Wednesday, 8 days later, when we handed a petition of 1,000 signatures to the Ministry of Finance. There were also articles about our disapproval in 4 newspapers. We also printed flyers at our own expense and distributed them to drinkers. 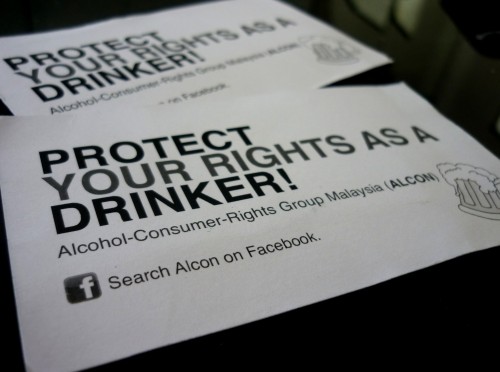 My push was for people power. As was chanted in the movie Battle in Seattle, “The people, united, will never be defeated.” 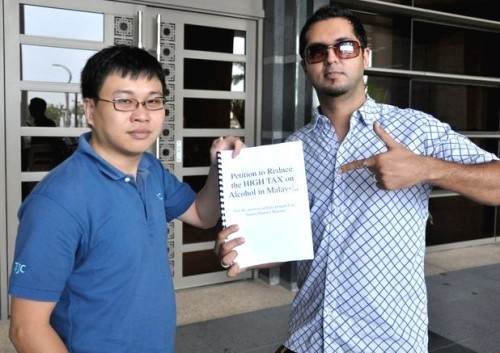 Alcon has other aims besides trying to reduce the booze tax. It will be d voice of drinkers as legitimate consumers, and there’re plans to formally launch it. Reasonably-priced booze is what we’re entitled to, but rarely get.

Mark-ups by outlets of between 50%-100% and beyond is  not acceptable. Alcon on Facebook aims to be your platform against such unethical practices. Members can use this platform (eg the group’s wall) to speak their mind. We’ll also inform members about affordable outlets and promos.

We as consumers need to protect our rights as drinkers, especially against high alcohol prices, whether caused by the government, by the alcohol industry, or by the outlets. 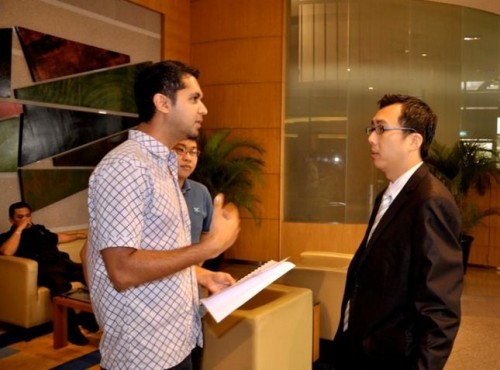 Handing it to the Minister's representative

Initially some people laughed at the thought of the campaign. Doesnt bother me. There are those who only know how to talk / bitch, and get nowhere in life. I heard the usual “C’mon, you think it’s gonna make a difference?”

What a dumb question.

If u ask that question, then you’ll never make a difference in this world.

Every action has a reaction. Doing absolutely nothing obviously is not gonna get anything done.

U know wat, ANY noize is a billion times better than no noize. Coz, the impact of no noize is…….   ZERO.

With regards to outlets, only Geoff Siddle of Sid’s and Denis of Jarrod & Rawlins helped. For reasons best known to them, other bars were unfortunately unsupportive of the campaign.

The Alcon campaign is at its peak. We called a press conference today. 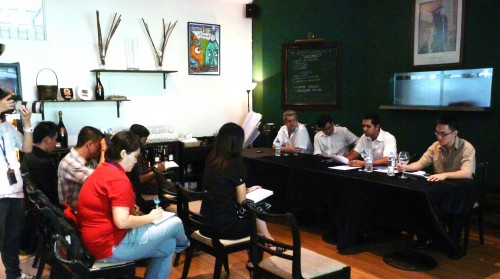 We read our statement and took various questions. It went well. They seem to understand our angle.

We heard it’s already out in Nanyang (pg 2) somehow! 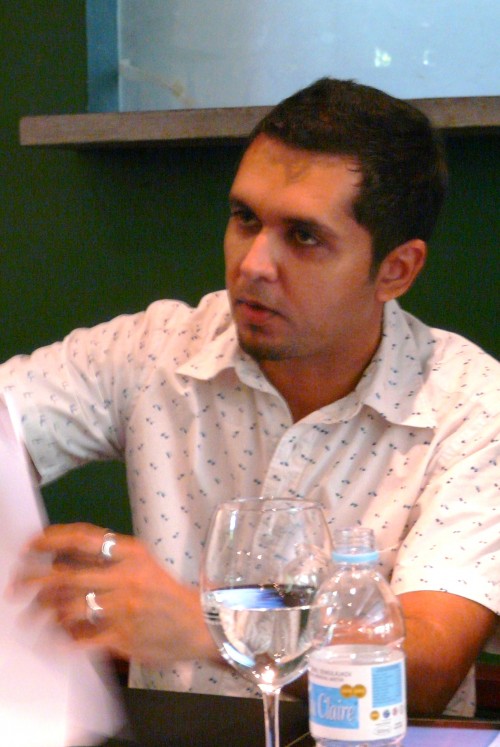 Anyway, Deputy Finance Minister Donald Lim replied my mail today. He cant be there tomw to accept the petition coz his mum passed away in Penang. His personal assistant called, and will meet us tomw at Putrajaya. Thanks Mr Wai Keat for volunteering to document that on camera. 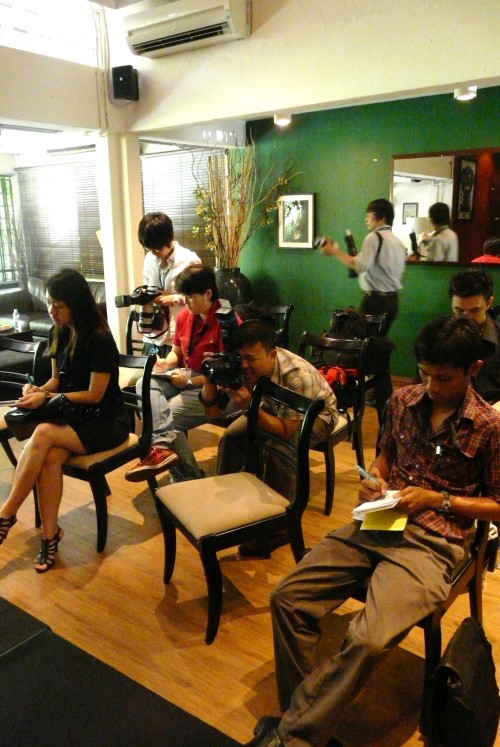 Deputy FT & Urban-Well Being Minister Datuk Saravanan wanted to meet us at 11.30am today but we cdnt see him coz we had the press conference.

When this idea began, some people laughed at me. Haha! Well they aint laughin now.

Anyway, the lightning campaign is goin okay. Big thank you to those who helped, esp Dave Avran who didnt sleep all night coz of a family emergency but still showed up to help, and left immediately to Ipoh, Nizam for the photography, and Denis of Jarrod & Rawlins for hosting the event. Salud!

I’ve had it with expensive booze! We’ve been payin thru our frikin nipples for goddam years, while the government and F&B outlets get loaded. Malaysians earn one of the least, but pay probably the most in the world for regular alcohol. Fuckdatshit.

Malaysians spend billions every year on alcohol – mainly coz it costs shitloads – the fault of greedy businessmen and the government tax. The tax itself that they collect comes to more than a billion bucks!

That’s a thousand million. From us drinkers. Every damn year. Puta madre man.

Thus, we’re obviously influential as consumers, and definitely an economic force – it’s time we realize that and empower ourselves. 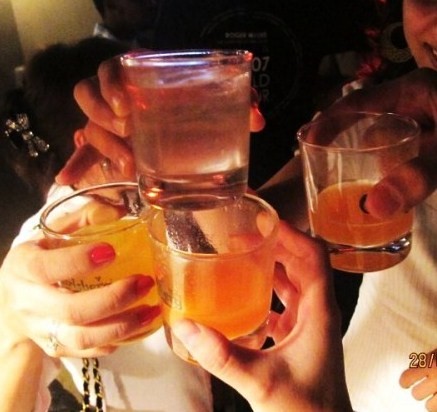 POWER is with the PEOPLE yall

Thus, today, we as responsible alcohol consumers formed a group called Alcon (Alcohol-Consumer Rights Group, Malaysia). No shit. The objective, to sum it up, is to act as a pressure group and fight for the basic rights of all alcohol consumers in Malaysia, which number at least a million.

We’ve been silent all these years! Why the fuck?!

We already pay the second highest duties/tax on alcohol in the fuckin world! Every bottle/can u buy retail, at least 40% of the hard-earned money is going to the govt! Is that fair? So there is absolutely zero justification for the government’s recent proposal to INCREASE the tax in Budget 2012 next week.

In fact, fuck it, we’ll be asking them to DECREASE the goddam tax. Since the Budget is just a proposal document, we gotta make some noise. If they go ahead and do it anyway, at least they wont take things for granted anymore, and wont shaft us as an easy source of funds.

Take beer for example – for every can u buy for say 5 bucks, almost 4 bucks is tax! Dats booshit.

As it is, people are turning to cheap-ass, locally-made shit (read this report) coz its cheap – like 10-20 bucks a bottle of liquor. Some stupid assholes who run bars are doing it too. (These guys are next on my shit list.)

Outlet owners and alcohol companies are free to join the group and contribute in anyway possible. Just understand that the priority of the group is alcohol consumers. And it will be driven by consumers themselves.

Thus, the long-term thrust will be getting consumers a better deal, whether we gotta get it from the government or from the other stakeholders. If not now, then at least in the future.

Someday we might even consider formalizing it as an association, but that’s not a priority right now. One thing’s for sure – the so-called consumer associations we have here aint gonna do shit for us.

In fact, traitors like CAP (Consumers Association of Penang) will probably support insanely-high prices. Consider these people our enemies.

Response to the group has been good. 300+ members in under 6 hours. We’ll be writing letters to the papers (u can do that too), and considering getting a signature petition out to the media and the Ministry concerned.

This is a campaign yall. A straight-up, people’s campaign.

Make a stand or shaddafuck up. If u’d like to help, drop me a comment or mail.

Get more people, and join the fight here.