A major beer festival will take place from Thursday to Saturday at Publika, Solaris Dutamas.

Visitors will be able to purchase over 50 types of  premium and craft brews, most not readily available in the local market; bottled, canned or draught, from Germany, Belgium, England, Scotland, Australia, Japan and the United States. 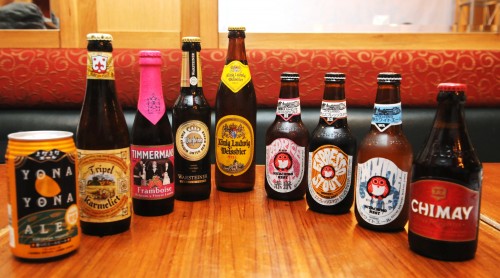 Some of d specials

There’ll also be drinking contests and beer games, which are sure to stir things up. Get ready to challenge yourself with a Guess The Beer contest and knock yourself out with n electronic bull ride. There’ll also be a Beer Pong Challenge, & limited edition Brewfest 2012 t-Shirts produced by Salty Customs. 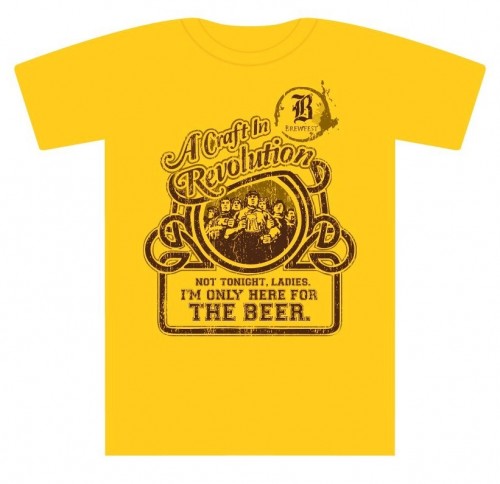 Some of the beers i managed to sample at the preview dinner at Brussels Beer Cafe include Hitachino, from what is a 100-year old sake brewery in Japan. It’s got a nose of light perfume. The ale is creamy in the mouth, with lil tickly bubbles. The finish is a very light bitterness that comes late. 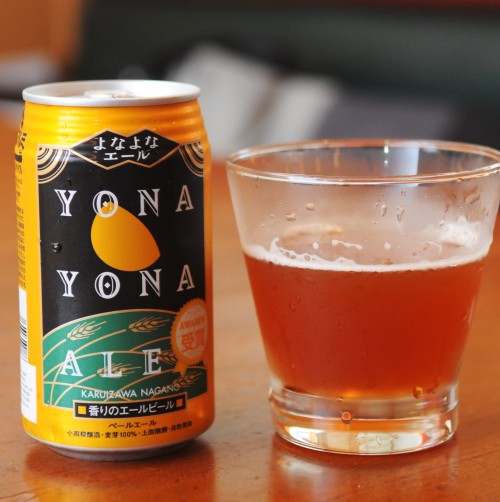 There’s also the Yona Yona, a Kilkenny-coloured American Pale Ale (Japan), with a in-your-face hoppines, while the Triple Karmeliet (Belgium) smells sweet, with malty flavours, and is creamy as well. I found the Chimay Peres Trappist similar – light, sweet and a lil malty.

Then there’s the Kwak, an 8.4% Belgian ass-kicker. If u like sumtin fruity, the Timmermans Strawberry is compulsory. Great flavours with a fizz. 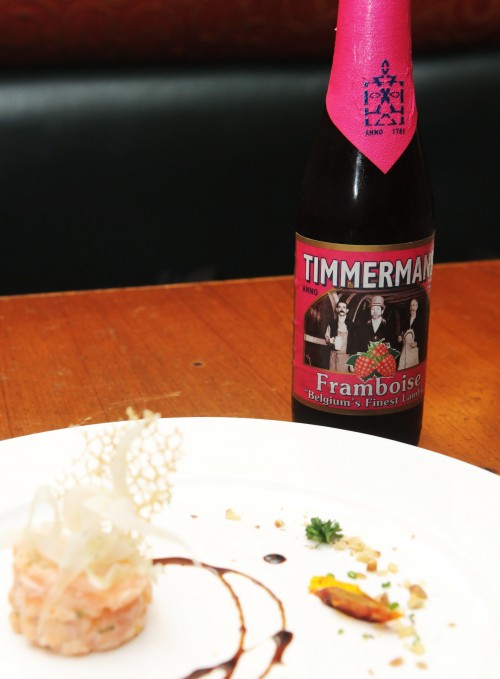 There’ll be these beers n more at Brewfest. There’s a door charge tho – $68, which i think is high. U’ll get between one to two beers.

Tested shitloads of interesting beers for some freelance work – writing a beer supplement for New Man mag. Twelve pages worth!

I was handed 30+ different beers to test, from all over the world (but sold here). How nice of the editor. 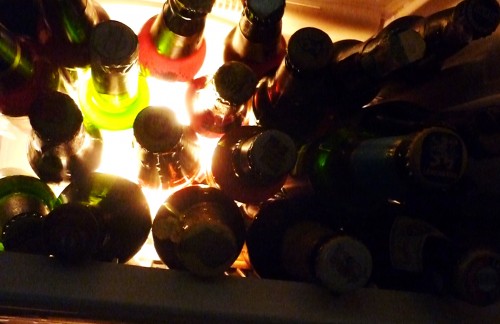 So many beers, it blocked out the sun

It was quite an experience. There were many beers that i’ve never had in my life. So i had a beer-tasting party at the pad. Needed back-up yo! Got prettyyy bent.

Am better at appreciating beers now, tho i’m still not a very big lager fan. Definitely prefer ales. I make exceptions for Beer Lao and Chang. 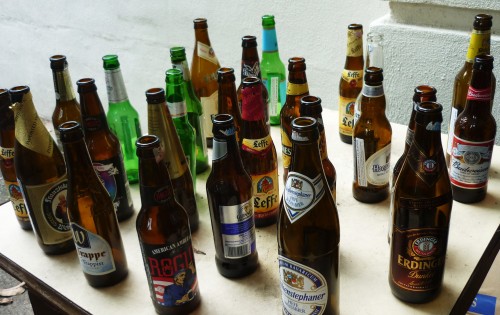 Some of the aftermath

It was a fun assignment. Of all the beers tested, 24 are featured in the mag, ranging from Best Draughts, Best Easy-Drinking Beers to.. 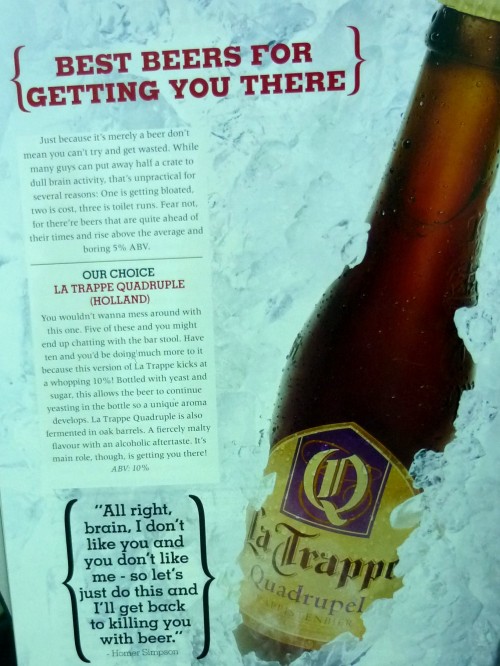 In a hurry to get whacked?? Refer to "Beers to Get you There" and choose from five options. This punk is a 10% 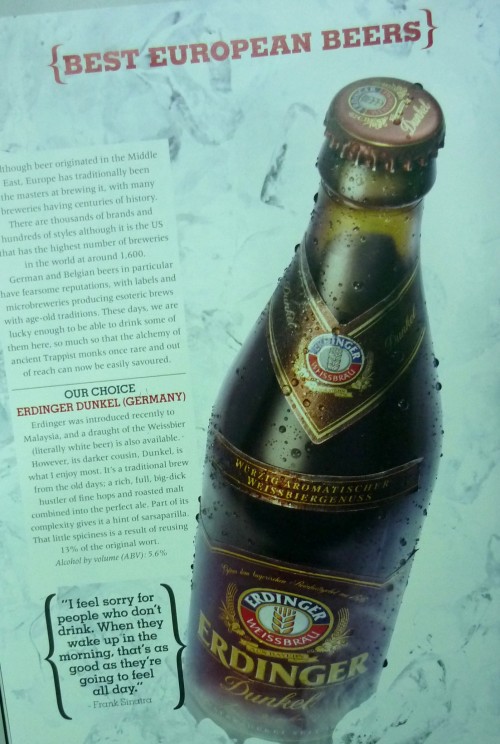 One of my favourite dark beers

Enjoyed the wheat beers the most – Franziskaner, Konig Ludwig and Erdinger Dunkel, a dark wheat beer. The articles are in this month’s issue of New Man. 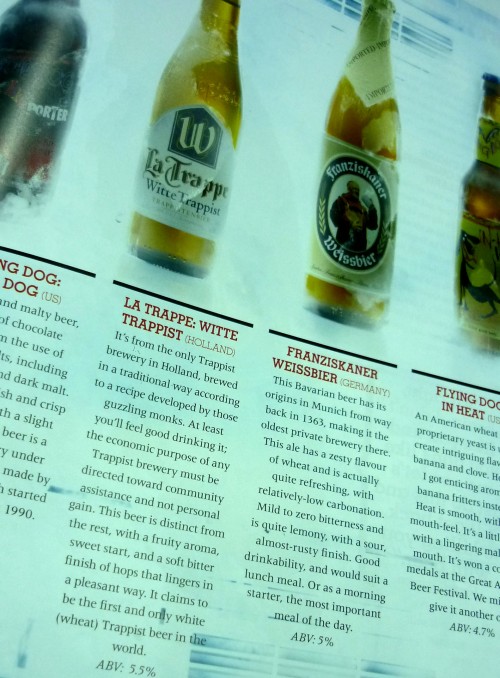 There's actually quite a range in Malaysia, mostly in supermarkets

The beers featured retail from $4 to $22 per bottle.

I hope this is an annual part of the mag! Monthly would be better of course, but there aren’t enough beers here dammit.

Beer. The world’s oldest and still most widely-consumed alcoholic beverage, usually made from malted barley, with hops added for flavour, and for bitterness, to counter the sweetness of d malt.

Its been around for ages – fuckers have been gettin drunk for at least 10,000 years! (And still no real hangover cure?? Other than this recent attempt. Dafuck man. Goddam slackers.)

There are two types of beers in the world – lagers and ales. Explain in a sec. 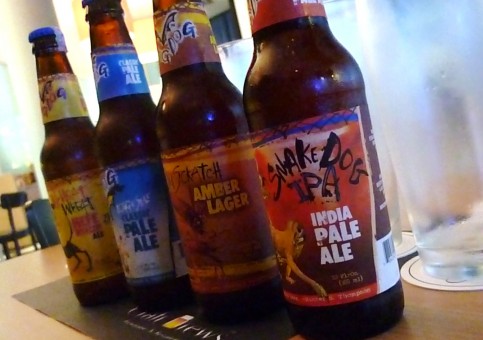 Last week tried out some American craft beers available at Craft Brews (7722-3000). Earlier in the month tried their draft beers.

These babes are from the Flying Dog Brewery, an award-winning one that began brewin d piss in Aspen in 1990.

It wasn’t a beer-pairing dinner; just beer. Four of ’em. (Hmm. Dunno why no bars / restaurants have hosted beer dinners.)

To kick off t’was Old Scratch (amber lager). Obviously the colour is amber as its a lager. 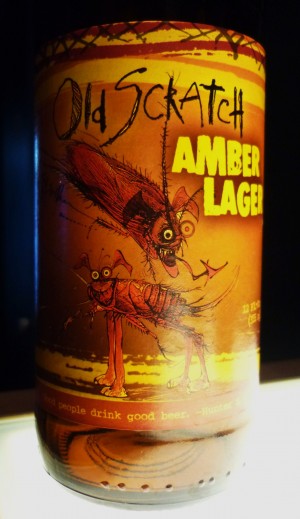 Wats da diff between a lager and an ale? To d layman, a lager is a pilsner like Tiger, Chang, Angkor, Bintang and all d beers brewed in this region. Its filtered, clear gold, crisp, and has a clean taste.

The difference in creation is lager uses bottom-fermenting yeast, ie yeast that gather at the bottom of the fermentation barrel. Ales use a top-fermenting species. Like cider. And wheat beers.

Ales are generally robust, more complex, bolder and stronger in taste and aroma, and normally darker. Very common in US, Europe, not really in Asia. Early beers were all ales. They usually have a higher hop content. Stouts fall under ales.

The strongest beer made so far is 32% – the Tactical Nuclear Penguin. Haha! Penguin also kena exploited. 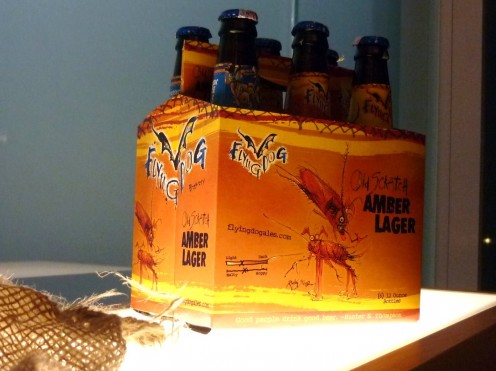 A pack of crazy dogs

Anyway the Ol Scratch (5.5%) is a malty beer, more on the sweet side, but mellow. The finish is light.

The Snake Dog (India pale ale) is a different story altogether. Its fosher a straight-up, big-dick ale. The aroma is of…. lychee. Seriously. 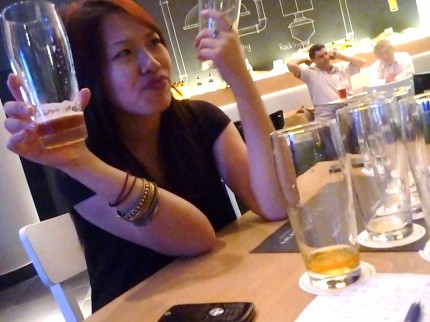 Its got an IBU (some new shit i learned) of 60, which means its goddam bitter. All these bottles have an International Bitterness Unit number at d back, ranging from 12 to 60.

Dis dude’s got character, a lil too much character for i n Grace. It’s gotta real bite. But a shorter finish than the Snake Dog IPA. ABV is 5.5%.

Its supposed to make u engage in doggie-style d same night. Didnt happen.

Even if it did, i aint no snitch. 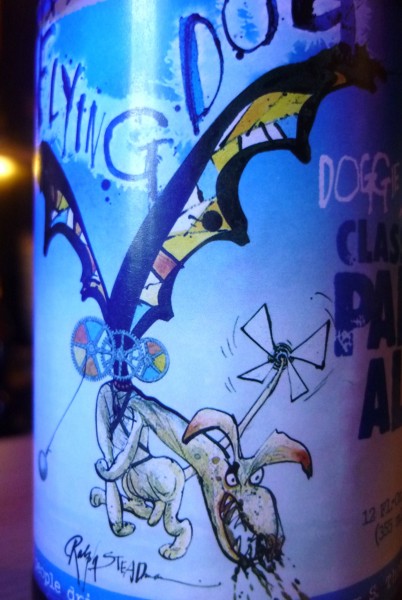 Final beer’s the In Heat (wheat hefeweizen – 4.7%). Its got the aroma of pisang goreng. No shit. 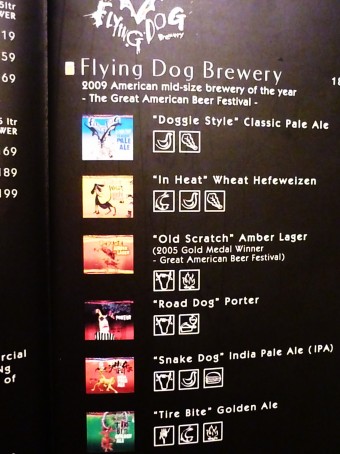 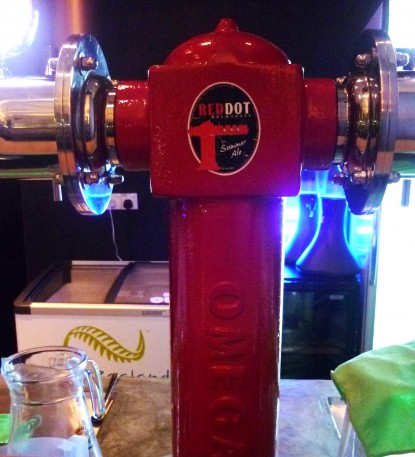 A hydrant beer-dispenser? Great spot for a dog to take a leak

The beers are only served from bottles and cost $20.70.

Party continued as we hit Alexis with my buddy Rubin for long islands. Got pretty bent on d way there. 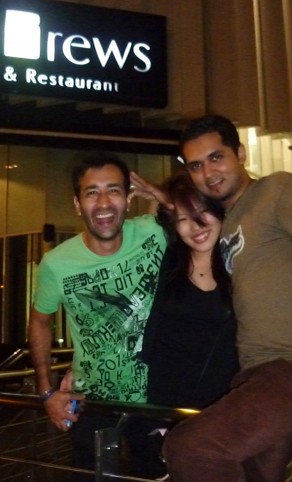