One of my favourite whiskies is The Glenlivet. It rocks.

The single malt from a glen near the river Livet (the t is not silent) in Scotland has been producing good stuff since 1824, and is the no 1 single malt in the US. It’s light-tasting and agreeable to most palettes, combining well with Asian food too.

It’s now owned by Pernod Ricard, who recently seem to be making up for their lack of Glenlivet events, fortunately. The latest was held at Barn Thai in the new Jaya 33 Tower.

They had pizza. Nice. 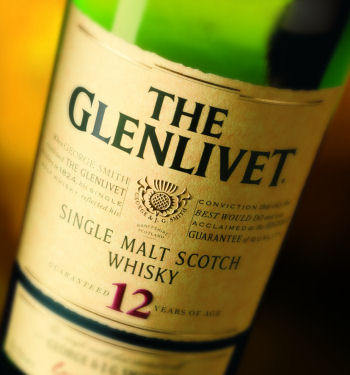 Glenlivet is whisky from Scotland’s rugged east coast, putting it under the Speyside category, whose whiskies are typically either light, grassy whiskies such as Glenlivet; or at the other end the rich, sweet, sherried ones like Macallan.

I’ve had various Glenlivet versions, but dig the 12 Years. Fruity nose, well-balanced in the mouth with no particular spicy tinge, ‘cept maybe a lil vanilla, and a smooth, medium-short finish.

.. the Glenlivet Alpha! A totally limited edition Scotch, with only 3,500 bottles for the planet, and 40 for Malaysia. 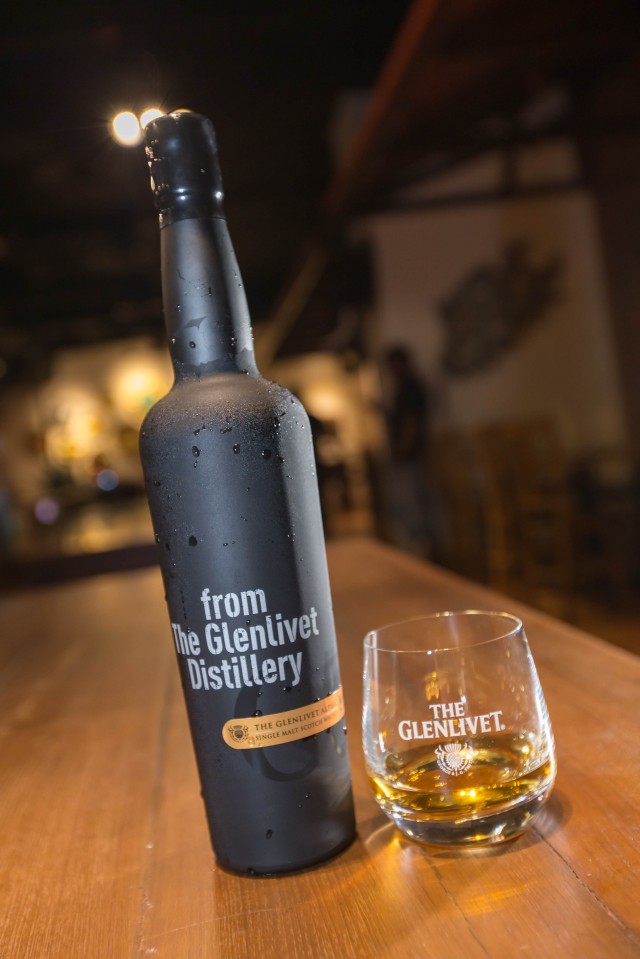 It’s awesome. Complex but smooth, with hints of  fruit. Sweetish, but spicy as well. ABV is 50%. Power.

The black bottle is definitely not whisky-like, and all it says is that its from the Glenlivet Distillery – no cask details, no age statement. (Those keen can get it at $868 from Pei Wen –

We also enjoyed the 15 and 18. Both score, with the 18 being particularly bold and spicy, if you’re into that; and the 15 quite rich.

The Glenlivet 12’s got my back. I think it’ll always be a close buddy to me! 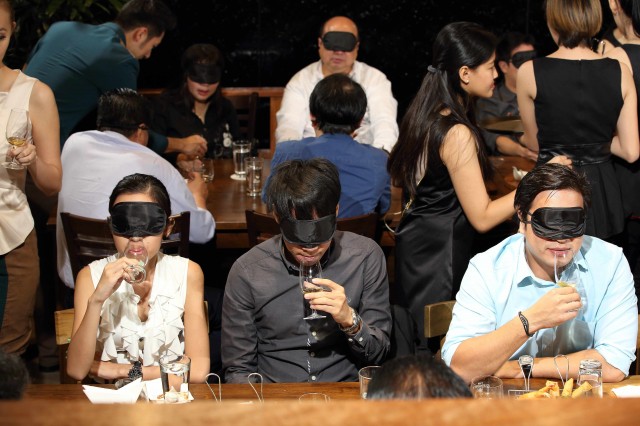 Yup, we were blindfolded for the Alpha tasting. Got a bunch of blindfolds at home now in case of kinky parties. Haha

Es Para Ti (7713-3615) is a Mediterranean/Spanish restaurant-bar in Damansara Perdana, PJ (Emerald Plaza East). It’s been open a few months, and i checked it out recently. (Same block as Friendscino: map, or refer to website)

It’s got a classic and cozy feel, with the use of bricks and wood adding to the ambience. 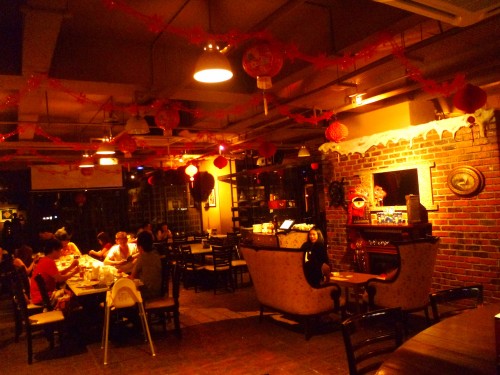 To warm-up, a pint of Franziskaner was in order. This is probably my fave beer at the mo, a German wheat beer. Unlike Hoegaarden (Belgium), this one has similar flavours, but more body, and less fruity.

There are loads of beers on tap here – eleven varieties, with stuff u normally cant get on tap.

Erdinger is a light-tasting wheat beer, lighter than Hoegaarden. Extremely easy-drinking, with a low finish – an easy intro to beer for anyone.

I also had the Franziskner dunkel draft. A more toasty and aromatic wheat beer.  Any pint of Franz/Erdinger costs $27 nett during happy hours (5-8) and $32 after.

Food. There was  a buffet goin on, and the joint was full. With more than 20 varieties lined-up at only 35 bucks per person, its unsurprising. Takes place every Fri/Sat, booked up till next month! 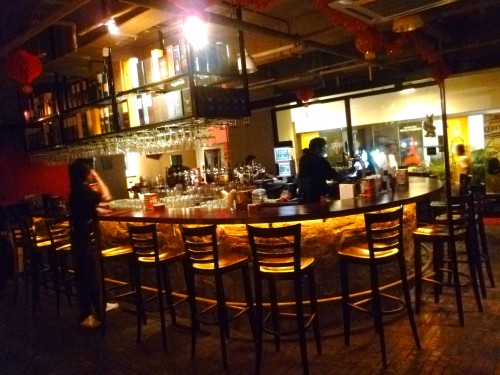 Had a peep – there was stuff like pizza, white wine mussels, lamb cuts, pork schnitzel, paella, Italian meatballs, pork sausages, and even pork knuckle! We sampled some – all were good, especially the calamari rings – fresh, tender, with a crispy outer. 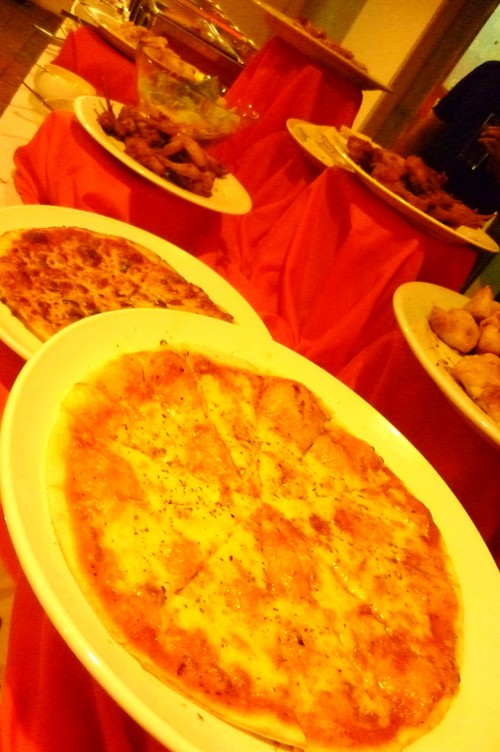 Anyway, started our meal with a Seafood Paella ($60 net for two). This was a hit, and the crew couldn’t stop havin a go. Loaded with seafood like large prawns, plus spicy Chorizo (sausages). Just the right amount of greasiness and goo-iness, and well-balanced with spices and herbs.

The Spaghetti en Papillote ($68) rocked as well. This is oven-baked, sealed with foil, and inside are squid, prawns, mussels, clams, anchovy fillets, capers, olives and assorted veg. The pasta’s consistency was perfect al dente, and the loads of garlic chips just sealed da deal. 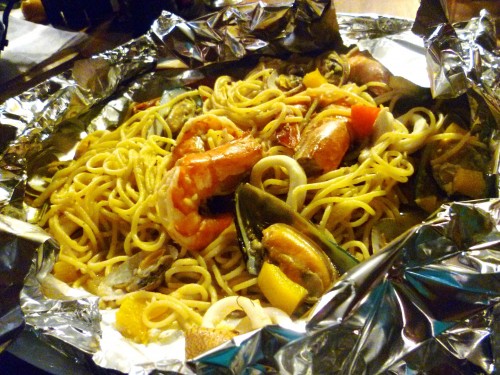 Then came the Little Piggy. Danny of Es Para Ti brings out a suckling pig. Looked kinda alive. I tickled his ears but he didnt react. The quarter hog ($55) was done just right, still juicy. The clincher was the volcanic chili that comes with it! Insane.

The guys gave approving nods while they munched into all the bites. From others’ feedback, i hear the roast duck and steaks are good too.

If ur interested in the buffet, call and enquire, as its kinda popular, and walk-ins might not get it. 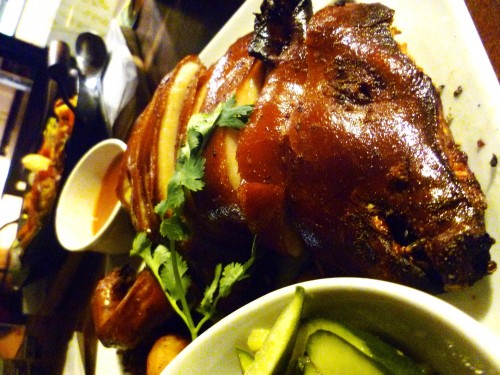 Look at dat shine. U need a blusher man

Portions are generous. All prices at Es Para Ti are nett, which is cool.

Standard liquors are between $280 and $300, and there’s a good range of single malts.

There’re shitloads of hot and cold tapas. Hours are noon till ‘very late’ daily, and the kitchen’s open till 12am, but snacks are available till much later. 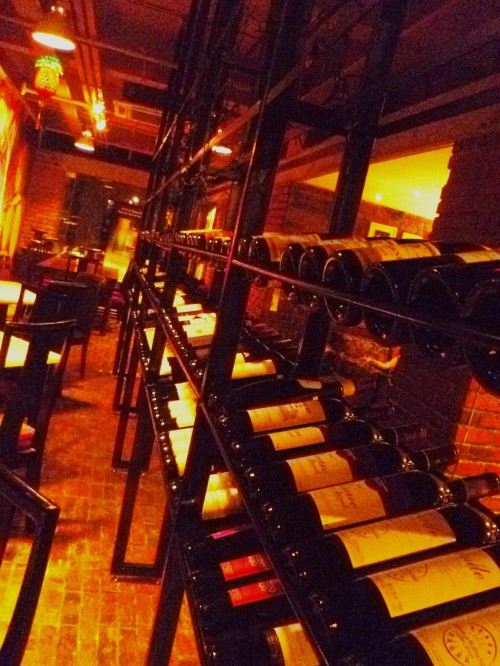 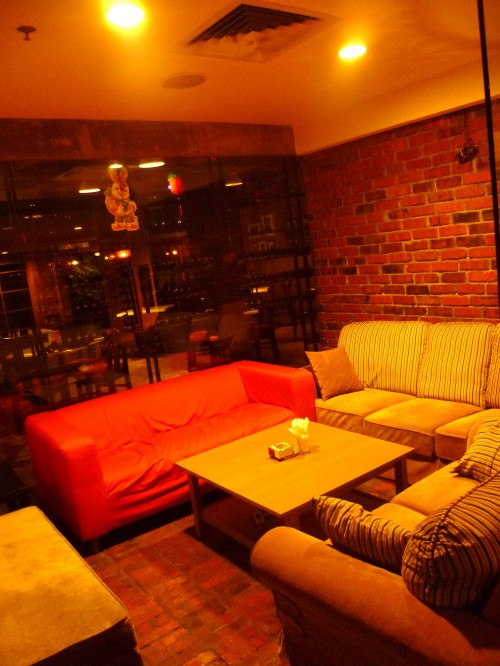 One of three private lounges 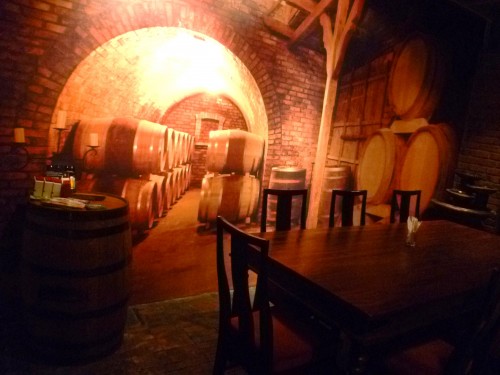 I almost charged into the 'cellar'

Unfortunately, after dinner, we got so stuffed that there was a leftover, which Homey swallowed: 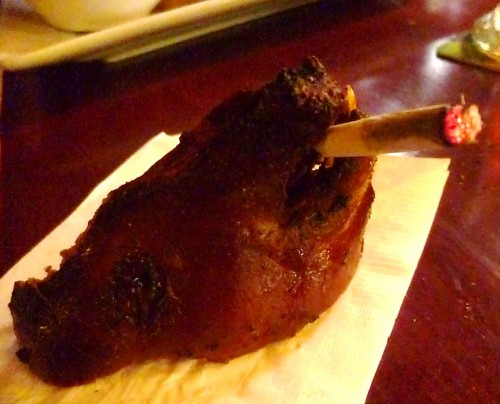 Yo, dont HOG it niga

The Funky Villa (7725-2308) is this restaurant & bar dats been around for a few months in e@Curve, Damansara Perdana, PJ. 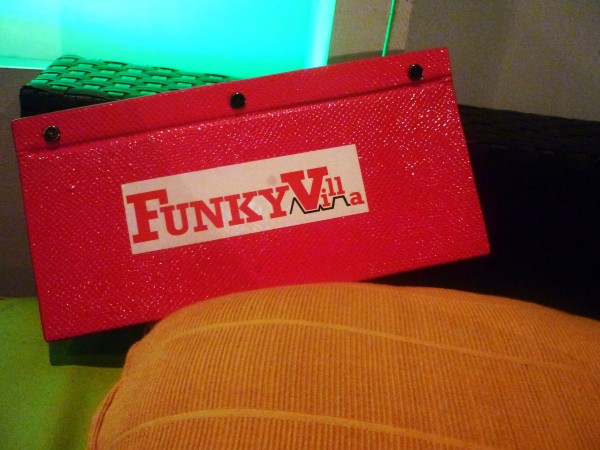 The food is actually authentic Thai. With good selection of grills.

More on that later. Our first drink was a giant margarita. Like fuckin huge. U could lose your face in it.

As compared to a large pack of fags

This is the Funky Rita, with four layers of flavour & colours ($67.85 net). It will take u ages to go thru this frozen stuff! Maybe an hour. So its best to keep this as a side drink while u have your main drink. Its def d largest glass of cocktail i’ve ever attacked.

My fave part is d top, which is a strawberry mix. There are like nine frozen cocktails dat come in these gorilla glasses, like Mama Alexander (rum, Tia Maria, coconut cream)  and Peach Alexander (Cognac, Creme de Cacao, peach liquer). 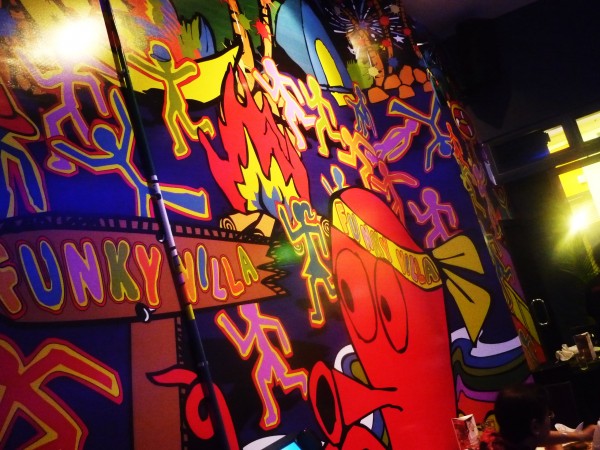 Tripped out, as the outlet is inspired by Koh Phangan's full moon parties 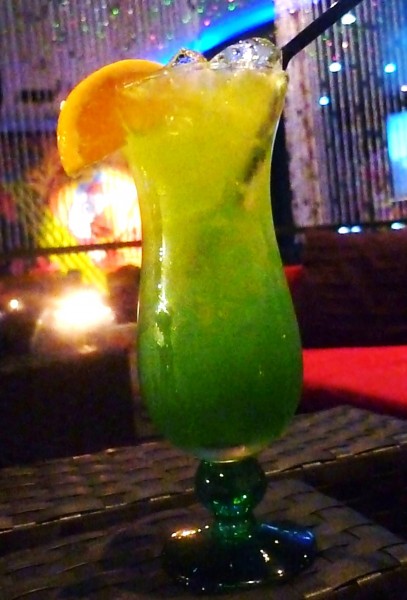 We also had some Illusion ($29.90) (Vodka, Malibu, Blue Curacau, Midori, OJ). Strong shit. But like any such cocktail, goes down quick.

I gotta say for a Thai joint, d place has quite a few drinks in its list.

D little food dat we had was great. One amazing dish from northern Thailand is the goddam Ra Hum On Jun. No shit. 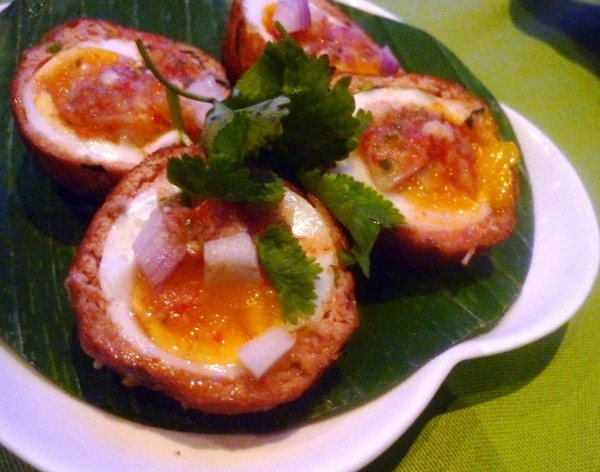 Take me to your dealer

Like nothing i’ve had in my life. Basically boiled egg wrapped in fishcake ($15). Am not really a big fan of either one, but man. The eggs are boiled to i dunno 85% or sumtin, so its not totally hard yet, jelly-like, and combines with the spicy fishcake topped with sum salad to blow your mind outta yor skull. 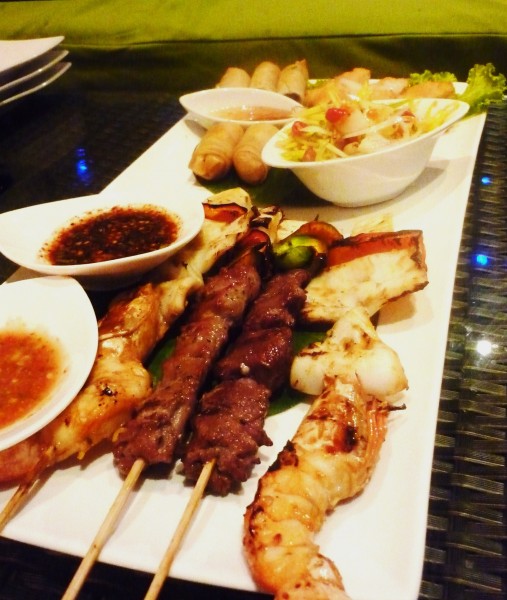 After recovery we dug into some platter. Tong Lo ($55.20). This one is kinda a good grill sampler of seafood, tenderloin, prawn cake, spring rolls and a mango salad. For a couple of alcos like me & Byron, we had a tough time finishing it coz our stomachs were full of margarita!But i gotta say, the outlet’s grilled food is excellent. A great accompaniment for drinks. There’re also loads of That tapas.

The menu is very extensive. Makin a choice could be a problem! There are six Thai chefs there.

So our food escapade ended right there, and we moved on to the Nutcracker, a cocktail of vodka, Irish Cream, Amaretto, hazelnut liqeuer and a lil vanilla ice-cream. 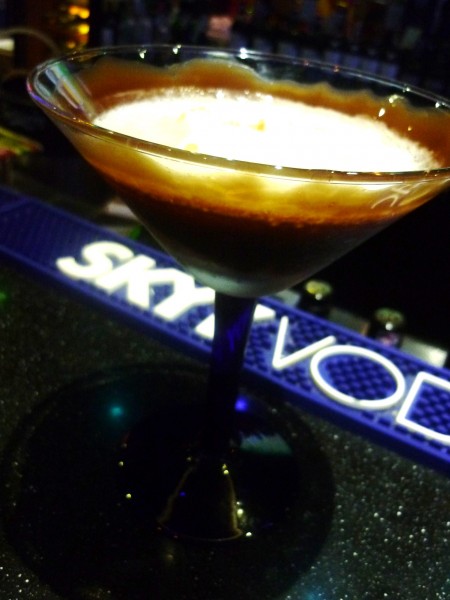 The outlet is labelled as a Thai Grill & Wine Room. It does have outdoor BBQ, as well as some wines. There’re actually several sections to it – the dining area inside, the bar  area, the cushy lounge, the patio, and the newly-launched Balcony & Funky Villa. 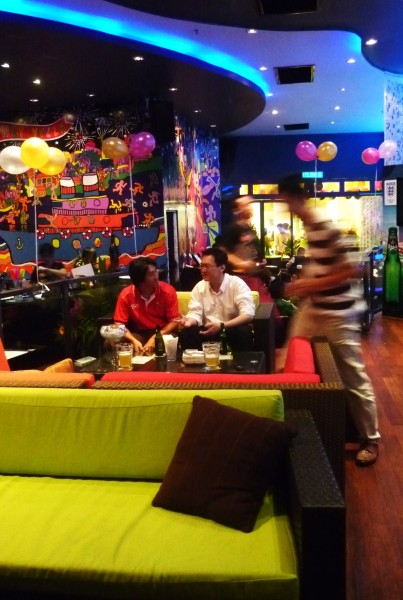 Barcony is a mezzanine floor, more like a balcony. A great spot for private parties or BBQs. I watched this fish (below) being BBQ-ed – lemongrass-stuffed, (thru d damn mouth) salt-baked sea bass, a northern delicacy. I tried a lil. Niice. 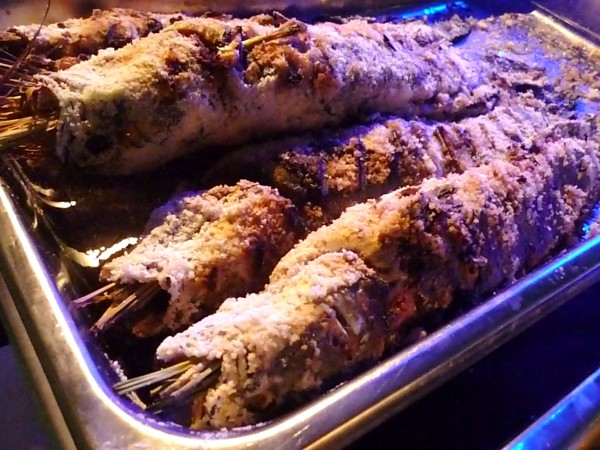 They got sum sweet lunch deals: 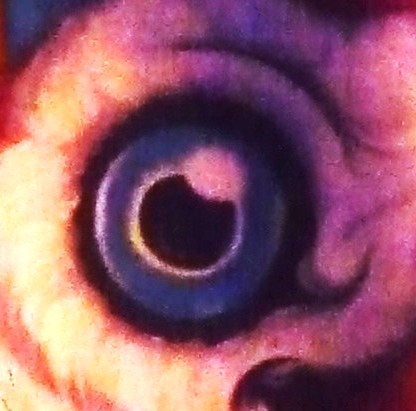 Click on their name to go to their FB page.

The Beer Factory (6141-6450) is a bar which opened recently at Sunway Giza, Kota Damansara. No, its not an actual factory, but uses that as a theme.

It’s got two floors (the upper one is called The Attic) and an outdoor area, which will be renovated into a garden theme soon.

One of the guys there, Kent, invited me over to check it out. And hit some of their house cocktails, with the help of head barman Daniel.

After a pint of Franziskaner, Daniel came to our table to set-up. There were mixers, flammable thermogel, a stove, a pan and Jack Daniel’s. 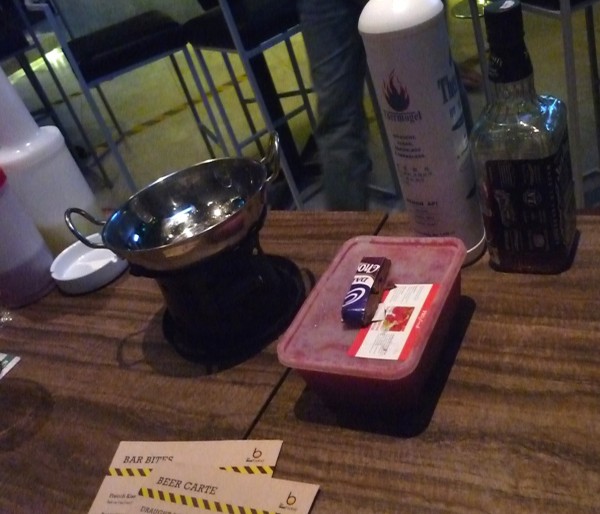 Then he got busy. He started to cook something right there. It looked like frying. 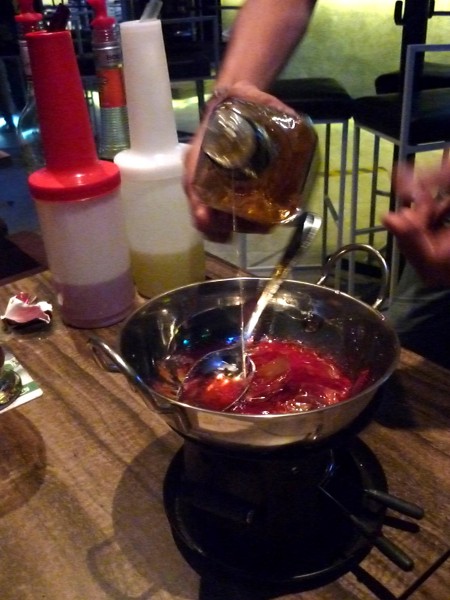 It’s a cooked cocktail called Take Me Home –  whisky, rum, Triple Sec, chocolate cubes, strawberry puree, cranberry juice & sweet ‘n sour. I fuckin loved it, coz it went down real easy, with a candy-like flavour. The chocolate bits was d clincher. It will hit u for $63.25 net (two servings). 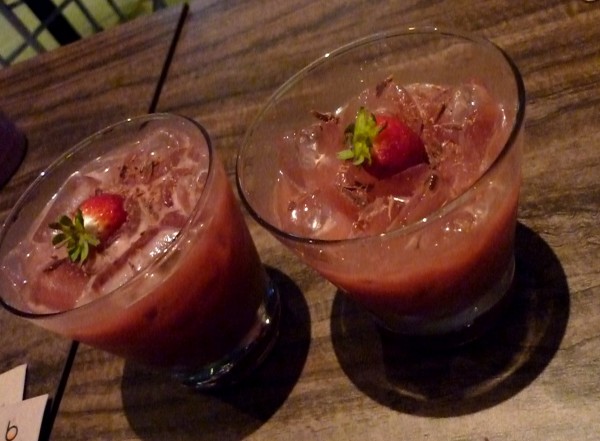 He proceeded to make us Strawberry Long Island Iced Tea ($40.25), with strawberry puree and crushed strawberries. Pretty strong. Some adjustment in strawberry flavour might be required if u prefer it sweeter. Its also available in a giant tumbler for $172.50. 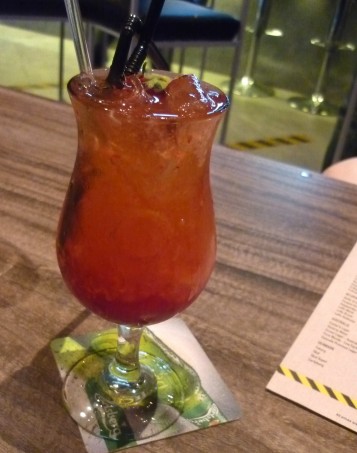 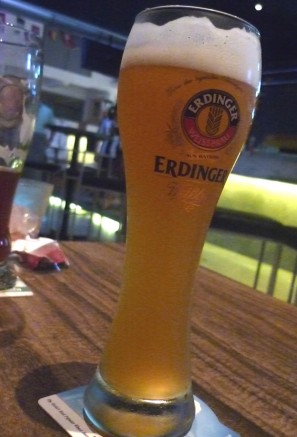 There are five signature cocktails.

Beers on tap are Carlsberg, Hoegaarden, Connor’s, Erdinger, Fraziskaner and Stella, with prices ranging from $17.25 to $34.50, while happy hours are until 12am daily for now, and will revert to 10pm sometime in d future. Operation hours are 5pm to 2am daily.

There’re also about 30 bottled beers. At the mo, there’re bar snacks, but there’ll be more when the outlet’s launched & the kitchen’s fully in op. 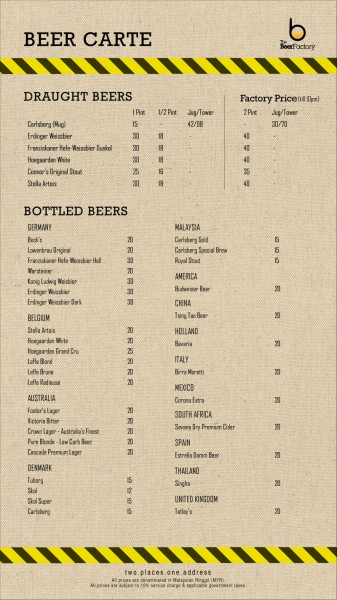 There’re promo prices for drinks during the World Cup.

Soon (probably mid-July), there will be a competition, Chapter 1, involving Erdinger. It’s 3-liters, 3 persons, 3 minutes, 3 Cemeteries, 300 bucks. Three of u will be given 3 minutes to down a HUGE fucking glass of Erdinger, followed by a cocktail each. Buy-in is $300 (pretty steep).  The winning team gets a 30-liter keg of Carlsberg.

The overall grand prize winner over the several months will win a year’s supply of booze. More details u better call ’em.

Hmmm. If beer weren’t so gassy, might give it a shot. The gas build-up is fuckin puky. It aint so bad with a weissbier tho. And a year’s supply of booze might kill me. Nice way to die eh.

But still my rep will drop if i end up spraying beer on spectator’s faces/shoes. Uncool.