… has to be Chili’s. They serve the best Guinness, but the policies are dumb, n d managers are possibly escaped chimpanzees.

I know many people who’ve had arguments with the managers at all Chili’s outlets – usually over stupid shit. Me included. Will get to that later. 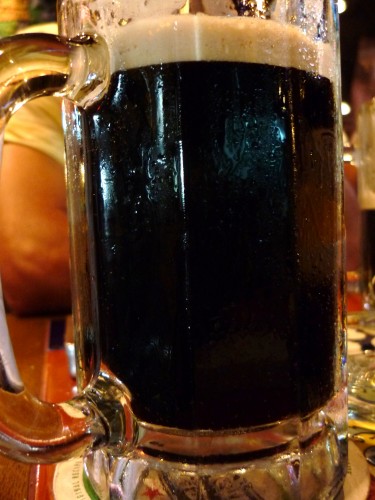 Anyway, the Guinness here is good. It’s d creamiest n by far the coldest u’ll find, as they’re served in thick-glass, frozen mugs. Most outlets, including Sid’s, dont freeze or even chill their glasses, and d Guinness is not cold enough. As soon as it’s poured into the warm glass, the drink starts to lose its taste. But Chili’s is only worth visiting during happy hours, which is 3pm to 7pm. It ends way too early. 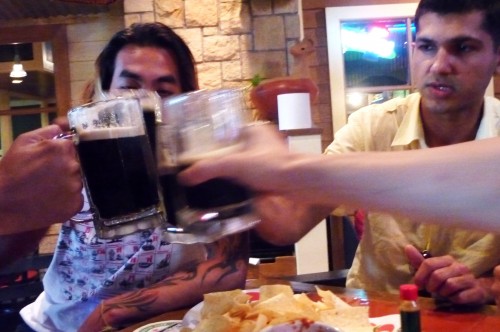 As good as ice-cold root beer!

Went to d Bangsar outlet with a friend n sit at d bar. I ask d waitress for d drinks list. We feel like vodka orange. Then i ask her, “Is it still happy hours for liquor?” She says yes. I say “OK then, gimme two screwdrivers.” I’m obviously referring to the happy hour drinks.

The drinks come. We order two more, then ask for d bill. Instead of billing us about $25, it’s around $80. I ask the bartender “What’s this?” He says “U ordered screwdrivers – no happy hours for that”. We argue.

Eventually a dumb manager appears. Instead of solving the problem, he makes it worse. With a sour face, he says “Vodka orange and screwdrivers are different.” (Yea, only on your moron planet. Dats like saying milo-ais and milo-peng are different drinks, with different prices.) “Here a screwdriver is a premium cocktail, so we use premium vodka. (By premium, he meant Absolut. Haha. In other words, its probably shit vodka from Klang otherwise.) No happy hour prices. You have to say vodka orange.”

So is it my fault your waitress is a dummy dat u pay 50 cents an hour? It aint my problem if Chilis are d only ones in d world that thinks vodka orange and screwdrivers are different drinks.

In-bred freak insists it’s not d waitress’ fault, but mine. I refuse to pay.

A gorilla shows up and stands next to d manager. Probably the BSC valet niga, part-timing as a gorilla. What, u wanna beat me up over this?? Pathetic.

My friend said a few words but she mostly observed, although she wanted to slap d manager. We tell them they’re talkin shit and  ignore them.

So we continue to sip our drinks with these two goons there standing next to us and staring at us. Haha!

Then when we’re done, i say, “We’re leaving. U either take what i pay u, or we gonna leave and ur not getting a goddam cent.”

FYI – a customer refusing to pay a bill for food/drinks or services rendered is not committing an offence. The police cant do shit. It’s a private contract between u and d outlet. If the management wants to recover d money, they will have to sue you in court. How dahell they gonna do dat when they have no idea who u are? So screw them over if even try to screw u.

O yea – another time a mug of Guinness dat my friend was drinking (same outlet) suddenly cracks and da shit spills all over her pants. D waiter says, “Sorry, will replace dat. It happens sometimes.” U spill drink all over my friend and u just gonna replace that drink? How kedekut. The least they could have offered was one complimentary Guinness for her or a meal.

(Breakage can happen when there’s some water in d mug before they freeze it.)

I was at the KLCC outlet once with a couple of chicks. We wanted to have a proper tequila session. I ask for a bottle of Jose Cuervo.

I ask why. “Just give us the bottle man. We’ll finish it tonite. We’ll be doin shots.”

” I cant sir. We cant charge by bottle.”

“I’m sorry sir, this is a family restaurant!”

Ooo. I didnt realize i was in KFC man! Family restaurant my ass! Why dahell is there a full-bar in d outlet? For little children to get smashed?

They wanna be a family restaurant and think that me n two little girls might get tipsy n trash d joint, okay, thats fine.

So i say  “Nevermind, we’d like 3 tequila shots each to start.”

He says, “I’m sorry sir, i cant serve all at the same time. U have to finish your drink, then order again.”

How inefficient is dat??

Bla bla fuckin bla. He finally surrenders and serves us what we want.

They have this stupid rule that u cant order your next drink if u still have some drink left! Haha! Morons. 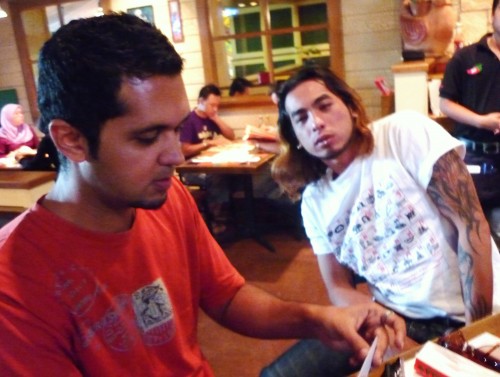 It’s shady Chili’s customers like these that cause trouble

A bunch of friends had gone to Chili’s for happy hours. There were too many of them, n d bar area was really congested, and people couldnt really move, staff included. So my friend asks d waiter to open a “Section Closed” area for them. He says “Sorry, only at 6pm.” This was at 5.45pm!

Eventually manager comes. Chimp refuses to open the area, although an exception to the rule was obviously needed. They argue. And keep arguing quite fiercely. By now it’s five minutes to 6pm. He refuses to budge. Dick.

So they leave and spend their money elsewhere.

My housemate Khang joins his co-workers at Chili’s Megamall just as happy hours ends. His Guinness is waiting at the table, pre-ordered. He asks d waiter as his bill comes if the Guinness is at happy hour price. Waiter says no. Disappointed, Khang says “fuck”, and promptly pays d bill.

A few minutes later the floor captain shows up. He tells Khang, “U have to apologize to my staff. U swore at him.”

Khang explained that he was not swearing at anyone, just to himself for being late. Stupid captain insists that Khang apologize. Khang gets pissed, so his friend steps in to slow-talk. No use.

So they ask for d manager. Some foreign white dude shows up. He hears the story. Then says “You have to apologize to my staff.”

Khang’s friend also gets pissed! Haha! Then he says they dont want customers like them around!

What kind of staff would go n cry to his boss when a customer swears??

Obviously, though they were regulars, they swore never to go back there. Same deal with me n the hopeless Bangsar outlet.

There were also banned from d outlet!

If u know anyplace dat has good Guinness in frozen mugs, inform me ASAP.

If they continue like dis, i foresee a nice, good fight breaking out in their outlet soon – managers vs customers. My money is on customers.

The managers are extremely confrontational and petty. I think they need some serious education about the F&B culture in Malaysia.

Hence when a situation occurs that is not in their hard disk, they freak. “Overload!!! Overload!!!……. Must kill customer!” Coz programmers forgot to include common-sense and discretion.

American Chilis – “Where the customer is always wrong.”

God knows what the franchiser in US is doing about all this. They gettin a real bad rep.

The company needs to get all their staff laid. I think there’s some in-breeding goin on.

51 thoughts on “The best AND worst spot for a Guinness…”