Happened at Craft Brews recently. It was a special five-course dinner that paired the dishes with certain beers.

The beers were Rogue, which had its launch party recently. The chefs were specially hired for the event – Cuisine Riot, a team of Malaysian-based TV chefs. The dinner was open to the public for a fee. 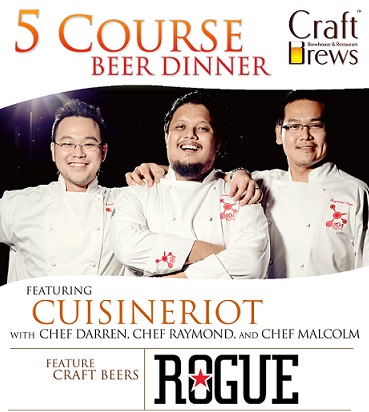 Beer-pairing is actually not uncommon, although most times it’s wine, not sure why. Beers (as in ales mostly), have depth and complexity as well. The problem here has been the lack of variety as most beers used to be lagers. That has obviously changed.

Craft Brew founder Paul Khong  says that Craft Brews wants to spearhead the beer education and appreciation trend in Malaysia. “We see it as our responsibility to create new and exciting opportunities to help and educate people on how to enjoy beer.”

Craft Brew has a range of beers, with the latest being American-made Rogue.

It was an excellent dish of tender, juicy slabs of meat, with a very wild-tasting ketchup. The beer was a little too bold and tasty for me. The OREgasmic was the only beer i couldn’t finish at the launch party.

When the next dish showed up with a couple of syringes, it got my attention. 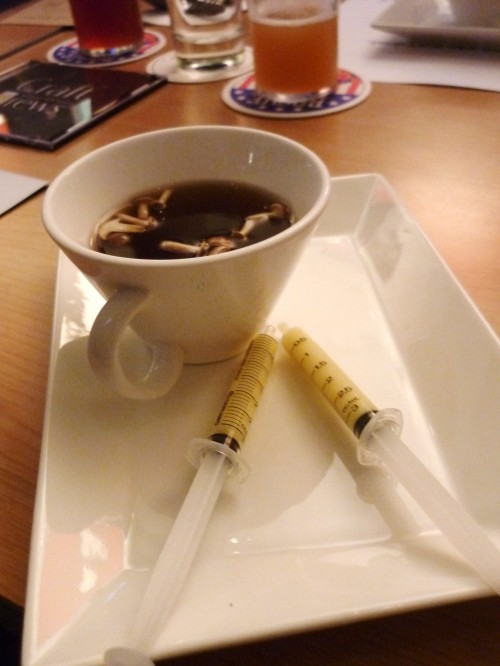 Where the needles at?

This is a mix of mushroom consomme, sago pearls and… instant noodles. As you fire the syringe into the soup (not your arm), it turns into noodles.

Cool. I enjoyed playing with my food.

This dish seemed herbal-ly, and refreshing, with medium-strength flavours, and went well with the light-medium beer – the pairing was with the Mom Hefeweizen (Belgian ale, ABV 5.2%).

Next was the duck fillet, Israel couscous and beetroot, with the Hazelnut Brown Nectar Ale (brown ale, ABV 6.2%). The bird was cooked quite rare, with a nice roasted skin, and gamey – which was tempered by the sweetness of the couscous. It was a good mix for the roasty, caramely beer. 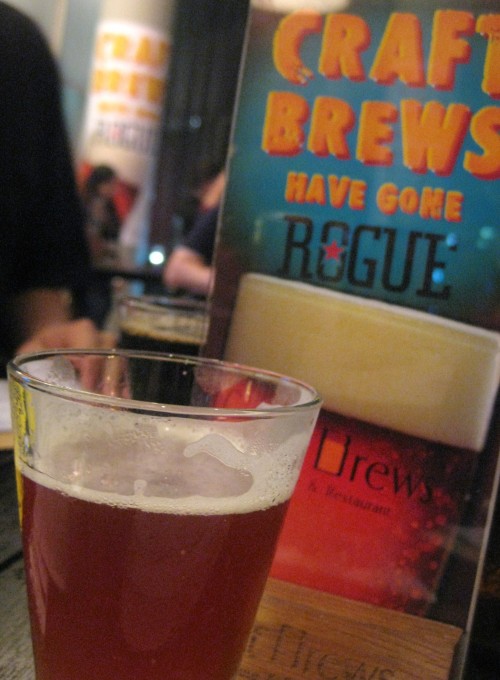 I missed out on the tandoori chicken and dessert as i had to split early.The next pairings were the Juniper Pale Ale and the Chocolate Stout. Dammit!

Well, am sure there’ll be other such events comin up. Look out for it if you’re into beers while dining.