She’s d latest bitch coz her body is seamless in the joint areas, being silicone n all.

None of ’em latex crap. Dats yesterday. D future is silicone. Her silicone breasts are also soft and realistic, and so is her skin. It’s smooth and does not feel like latex when touched / fucked. 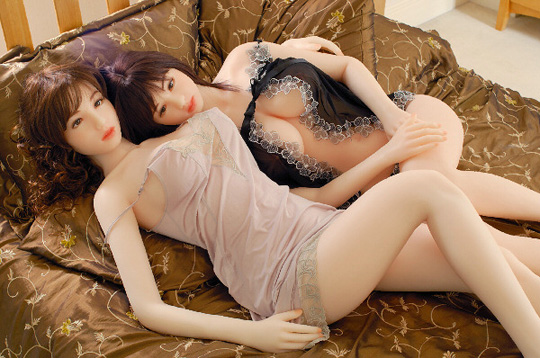 Fuckdatshit. A lil too kinky for me.

Japs are strange. Probably d most schitzo society i know.

They’re all polite n proper n decent but under d surface lies some crazy desire for sexual adventure. In a way, itz cool. Just coz ur nice n courteous dont mean u cant be open about yor perversions.

Anyway, these love dolls aka Candy Girls are big time shit. The latest model (Rosa) will set u back about 20 grand. Bitch.

There was dis interview with sum dude who has a room full of ’em. He’s spent more than half a million so far on his babes!

Dude watches TV with them, & bathes them n shit.

He’s one of an increasing number of Japanese men who have givun up on dating and marrying women in the real world. “He turns to his dolls for love, affection and sex.” It’s known as agalmatophilia.

Fuckin hell. How is dat possible? Am sure he has ‘conversations’ with them too, and breaks up fights between them.

I mean wat next?? Would the guys actually start goin out with them? Take em out on dates n drives. Take em to d park?

My friend Fadly said there’s a great movie about a guy who goes out with a doll, called Lars & the Real Girl. Will have to get it.

I guess d upside is i could open a whorehouse here n it would be completely legit! Coz technically, its not prostitution coz it aint human. The cops can’t bust me for pimpin.

Imagine that. I’d be a doll pimp!

My street nick would probably be ‘Rubbers’.

There could be a fuckin franchise of doll whorehouses all over d city in all d hoods n suburbs. I could make millions.

But its probably cheaper to buy real hookers.

Damn. I dreamt was standing near kl tower. Looked up n saw chunks of
concrete coming from d top. Looked s,all, until they landed. My buddy
took off. I was fascinated. Until And they started landing real close
to me. Fuckin start of an earthquake