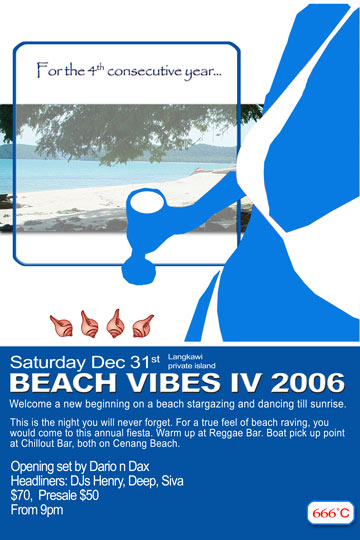 Where da party at

Been spendin six of d last seven NYEs outta town, at d beach. Out of which five were in Langkawi, and one in Koh Phangan. Partied like sheeeeet.

Organized quite a few kick-ass, dusk-to-dawn NYE gigs at this private island off Cenang Beach, Langkawi (flyer above). All d island has is a beach, a forest, n tons of goddam monkeys, so we had to transport all equipment by boat. We named it Monkey Island.

Got into the newspapers for d wrong reasons. Front page even. And some Senator brought it up in Parliament. Haha!

This time i guess its chillin in KL. Maybe a pub-crawl in TTDI. Couldnt be assed to head downtown.