Headed into the city Saturday morning to make a point, with a light hangover.

Unlike the last protest, we didnt have to go in a night earlier, as there was no city lockdown. Cops finally realized how futile and dumb dat is. 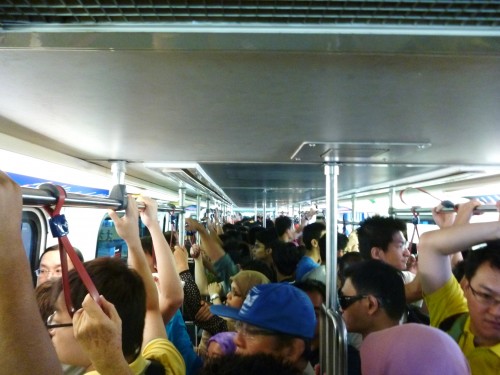 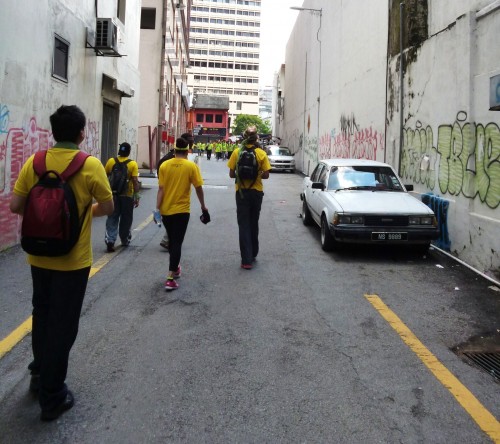 Walked in from Central Market station via back streets. A bunch of Greenies were coming from the opposite direction 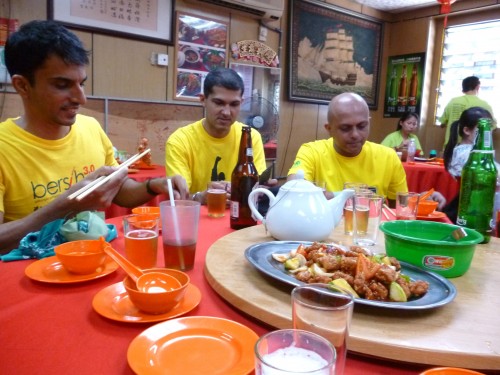 While we were eating in Chinatown, as we were early, there was a huge roar outside, along Jln Bandar. 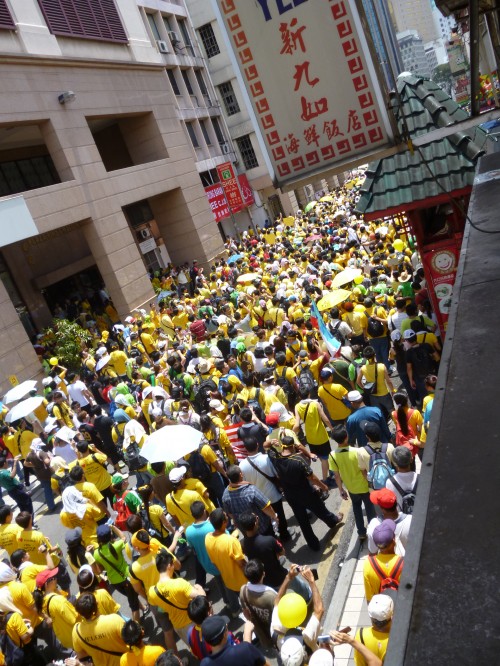 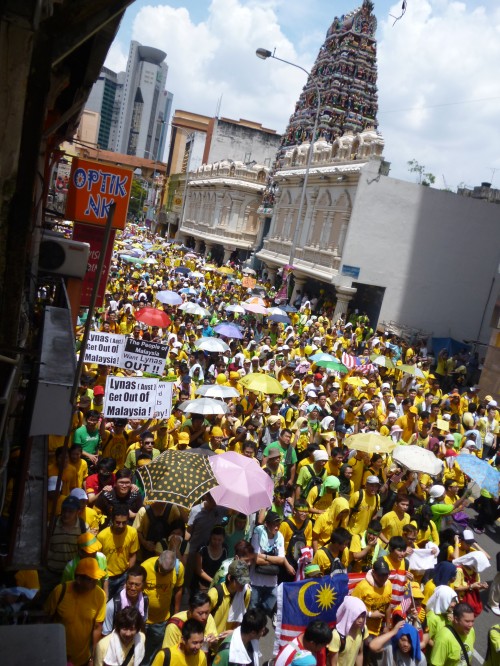 The Chinatown sector had started their march to the rendezvous. And they kept pouring. For about 15 minutes. Probably 15,000 or more  in this group i reckon.

We (a group of 7) walked out soon after, and made our way through some back roads, headed to Merdeka Square. 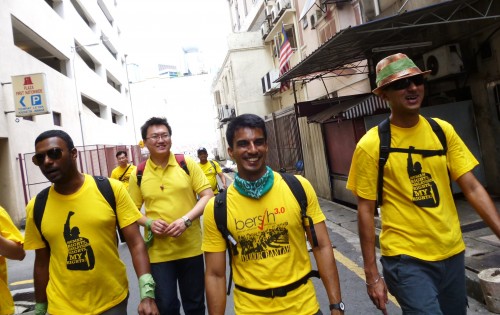 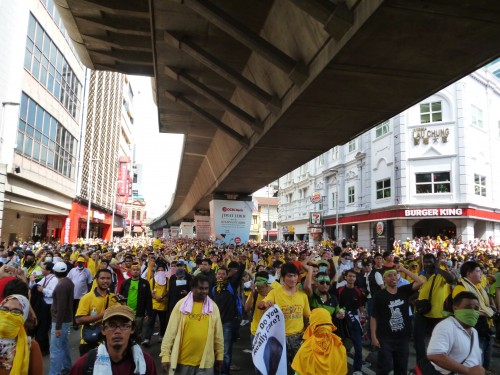 We went from Chinatown, to CM, to Tun Perak by Masjid Jamek

There was a huge crowd on Tun Perak. From the junction of Merdeka Square all the way to Puduraya and beyond, all 4 lanes were choked with people. Maybe 50,000 here. Further than the eye could see.

This turned out to be the biggest, and quite a hardcore group later.

Everyone just chilled, listened to speeches, chanted, and some sat. We found some space to chill on Jln Melayu, n put on some reggae tunes.

After about an hour, we stood up and our small group were discussing our next course of action, such as happy hours, when i felt a familiar taste in my eyes.

“I think it’s gas.” i said. Weird, cos there was no sign of trouble, and bored people were about to leave. In fact, some had left as we were told to do so about 10 minutes beforehand.

I moved up to locate the source, as everybody was still chillin n there was no gas visible, nor were there any sounds. A few seconds later, the crowd rushed in our direction, coughing and crying. The gas had kicked in, and from where we weren’t sure.

Anyway, many were first timers n panicked, squeezing into Jln Melayu. It got messy. They were trying to get away, but it was too congested. They panicked even more. The gas really started to kick-in.

Then we heard there was no exit on Jln Melayu! Some climbed over the railing and jumped onto the riverbank. Which was risky. 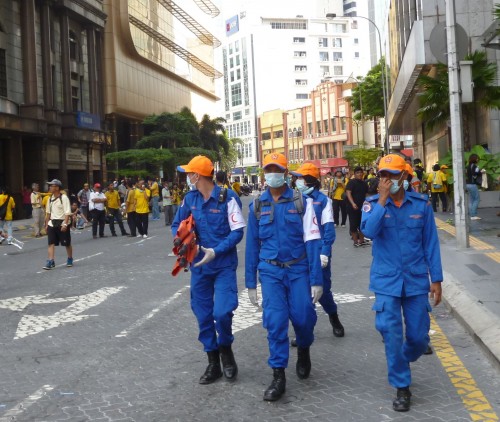 Stretcher crew n medics from Civil Defence. There were many ambulances in action from Red Crescent speeding around. Good job guys

I rounded d crew n decided d safest option was to head against d crowd, towards d gas, back to Tun Perak. Just before we got there, several gas canisters landed in front of us. Dat was a surprise, coz we never saw any riot police / FRU.

We decided to dash thru them anyway, and got onto Tun Perak, rejoining the main group at Jamek . It was a relief.

Some so-called protestors disappeared and went home crying after the first taste of gas. Haha. Amateurs. But at least they showed.

Mask helped a little, but its d eyes that get hit

From then, it was non-stop gas. The FRU would fire, we would suffer / throw canisters back / wash-out the eyes, then regroup. Many times. The Tun Perak group still stretched all d way to Pudu, but where we hung was d frontline at Jamek.

Everyone helped each other by providing water, salt or antacid-water mix. They gassed us for an hour, but we were goin nowhere. Then they sent in d water gun. Bad news.

Good news? A guy who got drenched shouted “Air biasa!!”. We laughed at the ‘fire truck’ and moved forward again. They were outta chemicals.

We weren’t really doing anything when we were attacked, hence we had no reason to leave when ordered by the cops.

Anyway they probably broke the law by attacking places other than Merdeka Square. 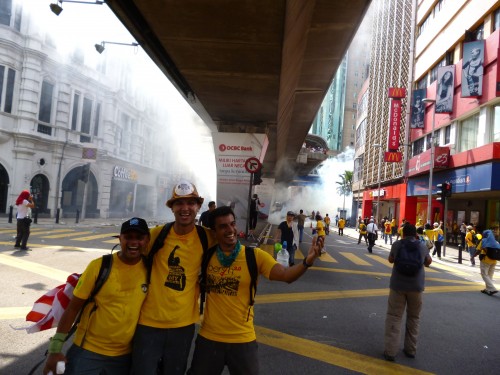 Squeezed in one posed shot, with BBQ goin on @ the Jamek LRT

After countless canisters, they sent in a large arresting team, which came charging with cable-ties. We dispersed.

Back to Chinatown, and we spotted a guys selling ice cold beers. Grabbed a few. Soon, i spotted gas. A small group were being harassed by the FRU. We joined them.  Some tourists too. Showed the FRU countless ‘affectionate’ signs after they fired horizontally at us.

Satisfied, we finally got d train back.

There were quite  a few posers at d event, posing n taking pictures at every opportunity, like it was some sorta fuckin bloggers event or sumtin. 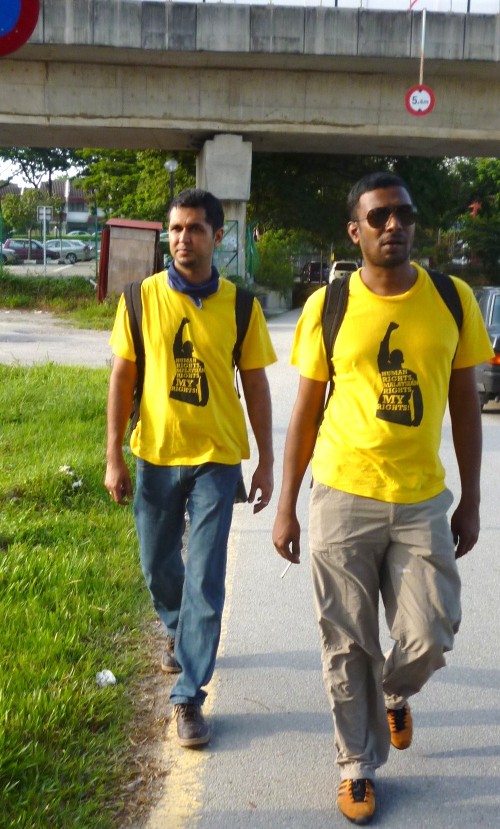 Anway, hit 42 East for drinks around 6pm. Got gassed so much my eyes were still tearing a little, 2 hours later. The other souvenir i got was a gas canister. Its quite retarded to fire one of those directly at people. Someone who found the shell said it was made in Israel. Great. 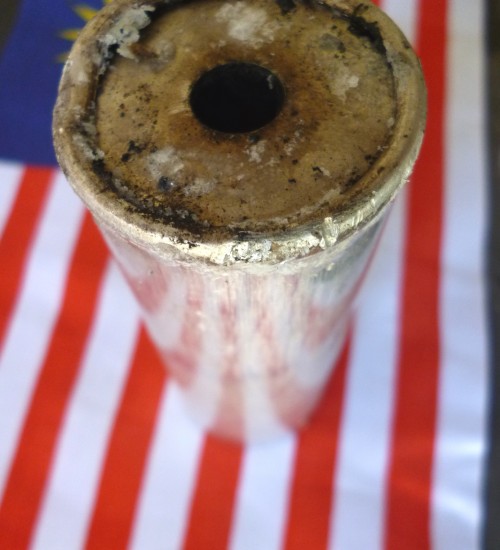 Trample all over us, why dont u

All in all, an exciting day.

Somehow had beers on three separate occasions that day.

Problem was, many SB (Special Branch) were disguised as protestors (as seen via many photographic evidence), and they were the main trouble-makers, trashing stuff, beating uniformed cops n shit. 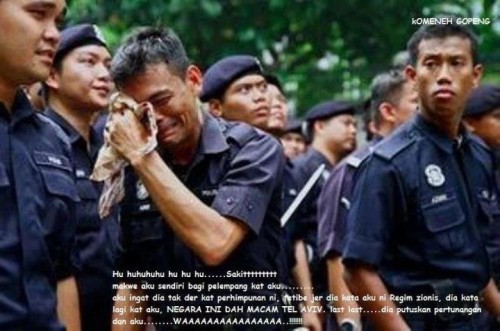 Awww, cant take your own gas? The macho pig from the first picture is actually a little babyyy. Wail away boy 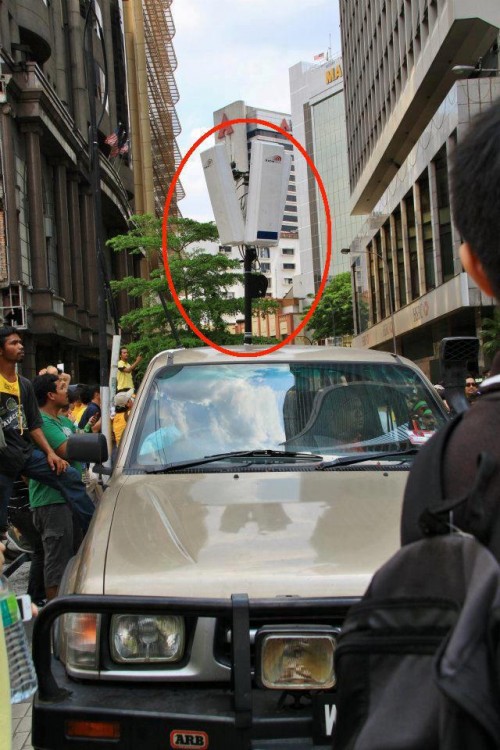 Checkit - there were even phone jammers to disable our communication. Where are we, Libya?? 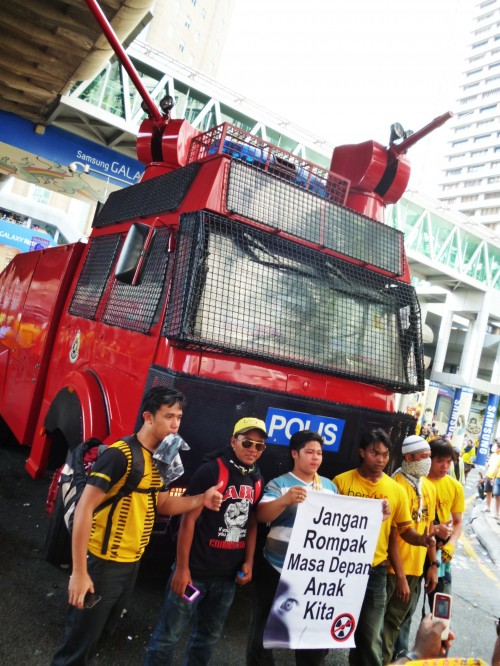 The police also beat-up many Press photographers – who were clearly on the job. Dats as ridiculous as riot police beating regular cops coz they were there. They also deleted photos / stole Press cameras.

If there was a little ‘rioting’, my guess its by the crazy cops, not the cool protestors.

This video will definitely cross half a million views. Good.

I hope the next protest will be against the goddam pigs, who were excessive n uncivilized. I’ll be there.

At least, the gas cleared my hangover and dead brain cells.

5 thoughts on “The Clean-Up Protest”