Barfight! is a column that features dudes / staff in the entertainment / F&B industry in Malaysia, or just regular alcos.

It’s a battle between two personalities. The winner is the one that’s most hardcore.

He/she will win bragging rights, and a bottle of my special strong cider, Baad Apples™ .

Today’s first barfight contender is Ben Ng, 26, a well-known professional mixologist who runs his own gig called Fluid Alchemy, whose services are used by most international alcohol brands for training, events and cocktail creations. I’ve had his stuff. Good shit.

He’s constantly working with various drinks brand such as Glenmorangie, Hennessy, Belvedere, Sagatiba, Cuervo, Boiron and a few others to develop their product & brand through trainings, masterclasses and other campaigns around Asia. 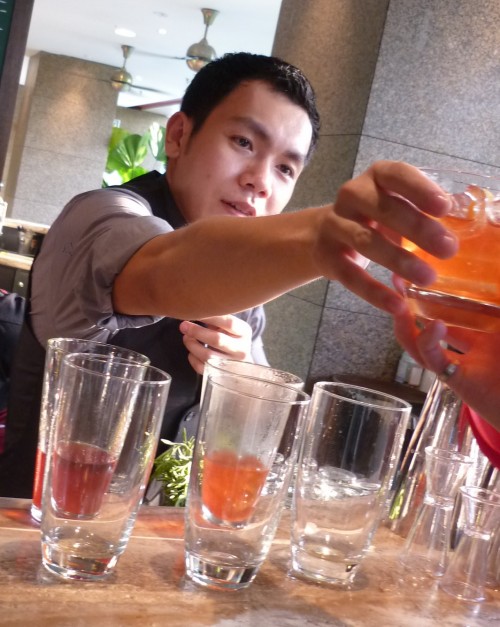 He’s up against Mark ‘Maverick’ Robert, 35, who used to bartend all over the city. He won a national flaring competition years ago when i was one of the judges, and the reward was a trip to compete in Australia.

He was national flair champ twice! (Among other competition wins, including Southeast Asia champ.) He’s now the Operations Manager for Sids Pubs. 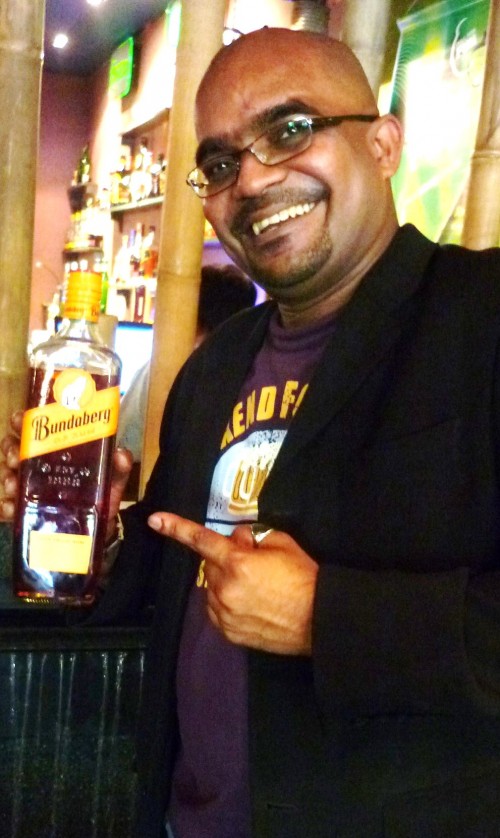 Ben: I’ve no particular favourite. I like variety so Guinness, Campari, Single Malts & Cognacs are on the to drink list whenever i go out – 3

What do u drink on a regular basis?

How often do you drink, and how many drinks per session?

Ben: Depending on the company and occasion…usually I’ll do 2-4 drinks per session on weekdays and probably a tad bit more on the occasional partying night – 2
Mark: Quite regularly, and ’bout 8 pints of Strongbow Cider – 5

What drink would you give your gerl if she wanna get real high?

Ben: I usually like them sober!…but then again ‘shagging cocktails’ do come in handy! – 2. (Ok that’s a new one!)
Mark: Absinthe or Submarine (Drambuie & beer or tequila & beer ) – 4

What would you give an alco who wants to get smashed in a hurry?

Ben: A pint of Guinness, a shot of Wray & Nephew overproof rum and a double espresso to finish! It only takes no more than 2 minutes to prepare – 3
Mark: Half Tequila n half Sambuca – 3

What is your fave cocktail u’ve created, and what’s the recipe?

Ben: I did one with light rum, ginger flower, lime, pineapples and some mangoes. It reminds me of the abundance of local produce and reminds me of flavours from my childhood – 5
Mark: Sexy Eyes: 1oz vodka, 1/2oz Peach Schnapps, 1/2oz Malibu, 1/2oz Blue Curacao, 1oz pineapple juice, float 2oz orange juice – 4

What is your opinion about alcohol?

Ben: One of the most under-rated nation-building resource – 4
Mark: Soothing to the soul, body & mind and does get you lucky sometimes. Hahaha! – 4

What do u think of Night Train Express, and when’s the last time u had a large dose?

Ben: College student’s source of inspiration – 2
Mark: Night Train Express is the bomb! Last I had it was maybe a few years ago – 3

Ben: Haven’t really had anything that bad that i did call it nasty, but I did try a really unpleasant home made moonshine from East Malaysia – 1
Mark: Stout and toddy mixed – 2

Have u been involved in bar fights?

Your most drunk incident?

Your most embarrassing incident?

Ben: Its embarassing enough not to reveal it here – 2
Mark: As above – 5

What do u have to say to Malaysian drinkers?

Ben: Take time to understand what you’re drinking and explore beyond the norm. You’ll find a whole new world of flavours that you never thought possible. And of course… yuuuuuuummmm sengg!! – 3
Mark: Drink responsibly and please be open to new cocktails or even new alcohol beverages – 2

OK fight’s over boys. Break it up! 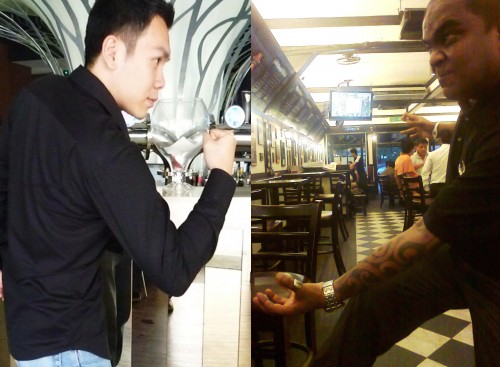 Mark whoops Ben’s ass. Totalled it. He’s obviously more rowdy, as he scored a few fives in ‘inappropriate behaviour’. Haha! Ben didnt do too well when he dissed Sarawakian booze.

Mark scores a good 48 points against Ben’s 33. Looks like u da man Maverick!

Depending on the company and occasion…usually I’ll do 2-4 drinks per session on weekdays and probably a tad bit more on the occasional partying night.

One thought on “Barfight! Ben vs Mark”