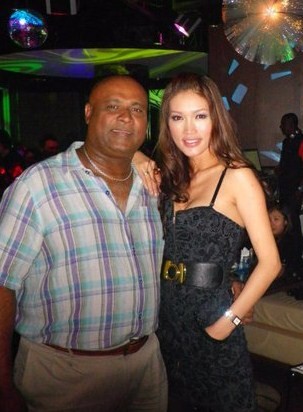 Nanoo - knows how to party

It’s a sexy, cool spot, which i plan to feature here soon.

He’s 47, married with two kids, and is originally from Penang.

1. What made u switch from hotels to bars?

Stopped hotel business when I turned 40. Needed more time for family, so started a furniture business. 3 years later went into restaurant and bar. No regrets.

2. What was life like at d resort in Seychelles?

Hard work in paradise. Had to run away on R&R every 3 months for movies, clubbing good food etc.

3. And at beautiful Madeira? (Portugal)

Madeira was very special, mountain and sea. It’s a volcanic island, so theres no flat land except for the airport and the one and only football field. I spend most weekends on the beach or the yacht of my best friend and driving up to some village for Poncha de Madeira (the cocktail of the month) Drive up to some private wineyards and
drink the whole afternoon and eat great BBQ meat called Espetada. I implemented it in WIP.

4. Nice. What’s d drinking culture like in a) Seychelles b) Madeira and c) Singapore?
Very interesting questions. Well, drinking was part of the culture in the Seychelles. The men love their Seybrew, the local beer, it’s a lager. After lager, they “Lager”, which means fight in Creole, and they do.

In Seychelles, full drinking starts on Friday and finishes on Sundays. Most small pubs only open on Fridays & Saturdays with most of them playing reggae music. They drink till they drop. We also spend a lot oftime going to island and drink the whole day with great seafood BBQ and music.

In Madeira, drinking is very social, or rather its social to drink. We would start at 6.00pm for an aperitif, move on to dinner at 9.00pm, normally drive at least 30 mins uphill on winding road for a great meal. Now start drinking wine most of the time. Portugal produces some of the best wines in Europe.
Unfortunately they cant produce enough to export these great wines. After dinner it’s customary to drink digestives or aguardiente or “firewater”. Of course not without a small coffee, cafezinho.
The real drinking only starts at 1.00am. We’ll go to the club. We’ll drink in the famous Poncha Bar till 3.00am and then move on to another bar till 5.am. The final countdown used to be a huge discotheque called Vespa. Here is where all the party animals end up every night. I remember walking out of this place with a glass of gin
tonic at 10.00 am so many times. This was real partying.

I normally rest till 4.00pm before going out for a cafezinho and a fresh poncha before going for a dinner. If not straight to the beach and continue drinking and sleep, rest and play.

In Singapore, when I was a Director of Food & Beverage on Sentosa Island, the discos were just mushrooming in Singapore with multilevel outlets. People were drinking very responsibly and the big guns were coming over to JB to party big time.

My recent stint in Singapore was very different, there were so many drinking holes and it never stops till 5.00am, so many parties in so many clubs
organized by many groups, Wednesday drinking group, Friday drinking group, expat groups, my group, your group etc, etc. Besides that, the tourists knew
exactly where to go. Here it is still a little blur blur lah.

5. Gosh, u were pretty hardcore eh? So what are their local brews?
Seychelles – Seybrew, Madeira – Coral Lager.

6. Which place had d hottest chicks?
Seychelles is 30% men and 70% women. What you think???
The girls in Madeira like sex and wild parties. Many ends up in the beach skinny dipping and sex on the beach after a night of Bob Marley.

Madeira chicks were hot but very much of a serious type of girls, they’re looking for boyfriends, and play also lah….better bet with tourist.
Hottest chicks go to Madeira..

7. Daaamn. Its on my list now! Wt did u like re your experience with WIP and 789?
With Fred & Michelle, the whole affair was like a very big family. It was great working with them, spearheading WIP was really an achievement for me as it’s one of the best outlets in Malaysia. A lot of research and thought had gone into it.

8. Why Celsius?
I’m also a partner, and I wanted to venture into something that I like and use all my experience to make this the best outlet in the city.

9. Do stand-alone city bars like Celsius have a chance against the strips like Changkat Bkt Bintang?
Obviously, when there are rows of outlets, people tend to frequent there, if they don’t like one outlet, they move on to the next. If they go to a stand-alone, it better be good, so the customers stay. We want to be good so the customers stay and return. We’re not working against any outlets to compare, we want to work on our concept and give the customers the time of their life.

10. Do many downtown suits n yuppies hit d bars after work?
We do have the white collars but not enough. However, we do have many regulars during happy hours.

11. Wt do think of d bar scene n drinking scene in kl?
The club scene in KL is actually very exciting, there are so many outlets popping out every month. If well-promoted by tourism, it can become the entertainment hub of Asia.

There are also so many outlets going into a price war, which is not healthy at all. We try to stick to what we believe in. Maybe there’re too many here and in PJ.

12. Is it difficult now, coz PJ has shitloads of options?
In the past, PJ and Subang folk come into KL to party. Now, there are so many options for them in PJ. Furthermore the police roadblocks have totally turned away the Subang and PJ clubbers from coming into KL.

13. Anything u’d like to say to the Valley’s drinkers?
Drink responsibly and have fun, try to use a taxi if you can. Check out Celsius Restaurant and Bar before you hit the other hot spots.

4 thoughts on “Boozepimp of the Month – Nanoo Raghavan”