I recently wrote an article for an online mag about a dog-banging service, ie, a dog whorehouse. Now my dawg Homey gets free lays every month. Every male-dog owner shd look into this. Checkitout.

Doggone! If dogs could talk, they’d be having an intense sociological discourse on the introduction of a new service, catering to the male of the species: recreational mating.

Bob Lee, or better known in the pet peddling industry as Uncle Bulldawg, is providing female dogs for fun ‘breeding’. Owners of un-neutered male dogs can bring them over and leave them at the centre, Dog E Style, for a mating session with one of the many ‘ladies’ available. 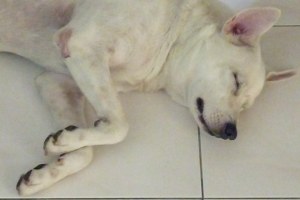 Homey flat after a fulfilling session at Dawg E

“I had customers asking me if I knew anyone who could help their male dogs get some action. Eventually I decided to start this service full-time.” Bulldawg, 45, ran a pet shop and exotic pets import dealings for many years before deciding to go into the recreational mating business.

He has since closed his pet shop when Dog E Style opened a month ago. However, as he has yet to receive his business license, the operation is low key and by word-of-mouth for now. He also refused photographs.

The top ‘hostess’ at the moment is Hottie, a two-year-old Dalmatian. “She’s great. And sexy. Many people request for her. But we don’t overwork Hottie. In fact we have a vet coming in annually to check on our stable,” he says.

The females that are in heat are regularly shagged at his outlet in PJ’s Kota Damansara neighbourhood, while the rest are kept at his ‘farm’. “It’s in Sepang,” he says, a little evasive about the exact location.

Prices for the service vary depending on the breed of the animal. Hottie’s rates are currently RM60 an hour, while the more ‘street’ variety’s fees are RM25 an hour.

“All our dogs are disease-free and sociable. They’ve been trained to entertain the males.” Others seen there were Cocker Spaniels, Retrievers and a Poodle.

However, if your pet does not get it on with Dog E Style’s bitch, you don’t have to pay. “You only pay for a confirmed score. But most times, there’s no problem. The females don’t get pregnant as we feed them a pill that prevents fertilization,” explains Bulldawg.

Several dog owners had positive reactions. A 30-year-old client who declined to be identified says he will send his mutt there monthly. “I lost two male dogs over the years when they ran out. The reason they escape is to mate, but something happened to them and they never returned – maybe they were run over or kidnapped. Now my dog is happy and doesn’t attempt to escape.”

“It’s great,” says Ryan Fernandez, a 32-year-old short-films producer. “My dog used to get really frustrated if he hadn’t mated for a while. I don’t want to neuter him, as genital mutilation is cruel and unethical. I don’t want him doing it with strays, as they’re diseased and also they would be creating unwanted puppies. With Dog E Style, my problem is finally overcome.”

“I would use the service,” reveals Jo Lim, a 25-year-old food & beverage executive. “I had a male dog called Furry who died a virgin, and I still feel guilty about it! He was nine.” She says as a caring pet owner, she would utilize the service once every two months. A pet shop owners admits that there have been requests by owners of male dogs for such services.

Currently, Uncle B has regular clientele thanks to security firms that send mostly Alsatians and Rottweilers there. He explains: “Male guard dogs are better when they’re not neutered. But they can get frustrated and a little aggressive if they’re sexually-deprived.”

Some might feel what the cool Bulldawg is doing is not right. “Why not? It’s a service that’s badly needed!” he exclaims. “It could reduce the number of strays that get pregnant. In fact, there are people who pair pedigree dogs to get the female pregnant. They then sell off their dog’s babies just to make money. Isn’t that worse?!”

Well, the thing is, there’s no law against this. It’s legit.

“Female dogs aren’t receptive to mating all the time. Is he drugging them to make them submissive??” She plans to send a representative to check on the animals.

In response, big pimp Bulldawg claims he’s willing to work with animal shelters like Animal Welfare and SPCA. “They have too many dogs there. If they want, I could borrow some females for my services. For every ‘customer’ they entertain, I’m willing to give SPCA a cut – RM5.”

Mac daddy concedes that there might be initial resistance to this radical idea. “At the end of the day, at least the idle dogs are utilized instead of being put to sleep, and get to socialize with other dogs at my farm instead of being kept in the pound’s cages. And the shelter is guaranteed some monthly income.” He’s willing to take care of all related bills of the borrowed canines.

The Malaysian Dog Owners Association reserved its comments until it knows more about the service. “We will also pass this information to our members and gauge their reaction,” says a spokesperson.

He then adds “This is quite astonishing.”

The premise has an owner’s waiting area with a TV and free drinks, as well as a games room with a Playstation. If you’d like to check on your dog to ensure he scores, a monitor is available in the office. The action rooms are simple, small rooms with little lighting.

When ‘off-duty’, most Dog E Style dogs are allowed to roam the premises. There are also massage and grooming services (for the dogs that is).

Bulldawg is cool about some heat that he gets. “I’m a dog lover myself. My conscience is clear because I know the dogs are happy, and I take great care of them.”

Dog E Style is considering house calls. “Once we’re less busy we might send females for ‘overnighters’ as well.”

Note: Until May 1st, Dog E Style has a promotion: A 15-minute massage will be thrown in for each customer (canine). Further info e-mail: bulldawgstyle@yahoo.com

11 thoughts on “Sexytime for dogs. Awesome”