Dawg Homes has been ‘hospitalized’. Dude was not eating n kinda lifeless for a coupla days, gums n skin practically white, so took him to d doc.
Doc does a blood test n says he got sum auto-immune disease or sumtin. His body is eating up its own red blood cells. Its down to 13%.

He’s hasnt eaten for days and is on drips now. Doc says if it gets worse, might have to do a blood transfusion.

I had to stop myself from laughing when i heard dat. Fuckin transfusion man! Didnt know they have such shit for dogs.

Homeboy’s gotta fuckin lampshade around his neck, so he dont yank out the IV line from his paw. 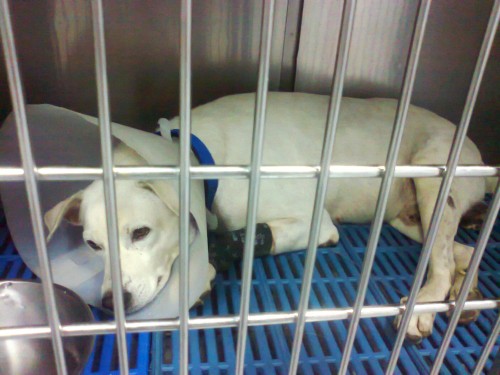 All i know is its gonna cost a bomb!

10 thoughts on “Homey inside”