Had a great week in Laos. Vang Vieng to be specific. Second time around.

Hit it with my bro & Klang Kenny. As soon as we strolled outta d airport in Vientiane, we were on da road to VV. The three-hour journey took longer due to d many Beer Lao stops, as well as sourcing for bites.

Food over there is consistently great, whether local or foreign. The street-side grilled pork ribs are insane!

Spotted a bbq goin on, so told d driver to turn back. 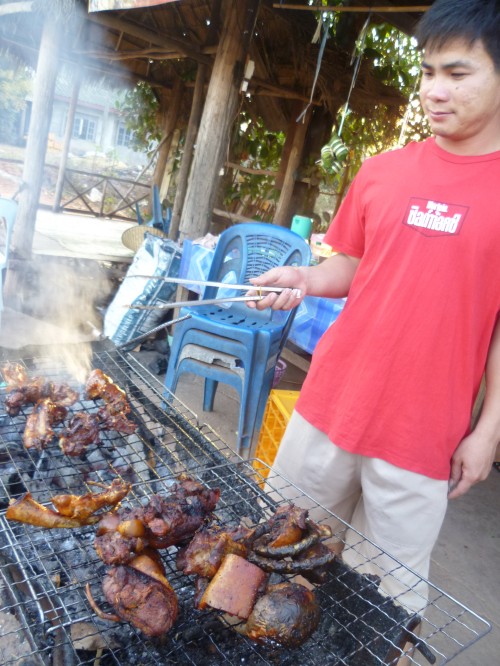 VV seems exactly the same as it was two years ago, thankfully. Beer Lao, which used to cost 10,000 kip, is still 10 grand, or 4 ringgit. But its even cheaper now, coz we spent mostly in US dollars, whose value has dropped. So a large bottle is only RM3.60 now. Haha! 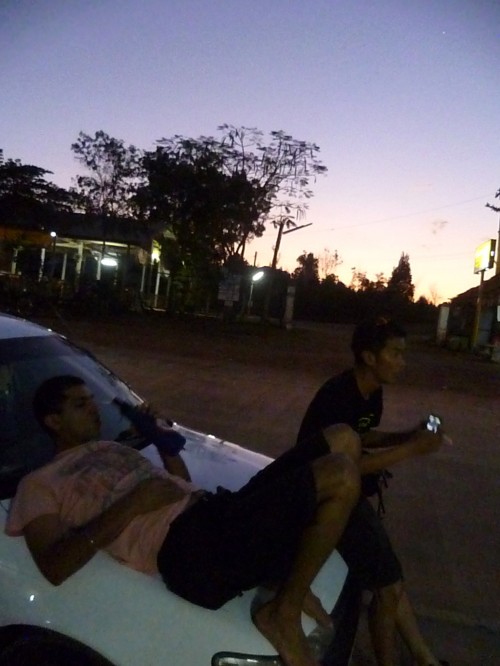 One of d many stalls we checked-out had bbq bats. 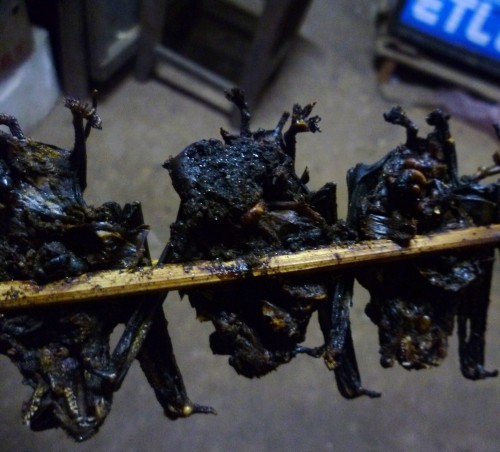 Decided not to try, coz i dont like d smell of bat shit!

Crashed at our usual spot, the Other Side Bungalows (huts), which lies across the Namsong River, which runs thru VV. 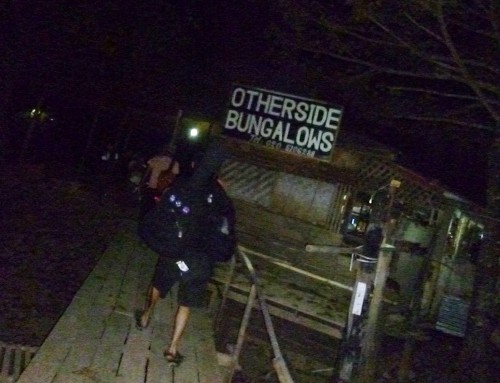 The bridge by day (left) dat leads to our pad 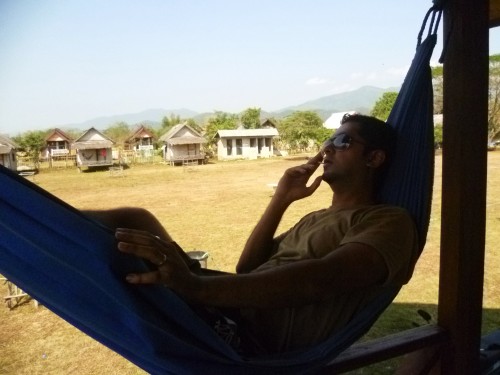 Chilllin at our 'VIP hut' 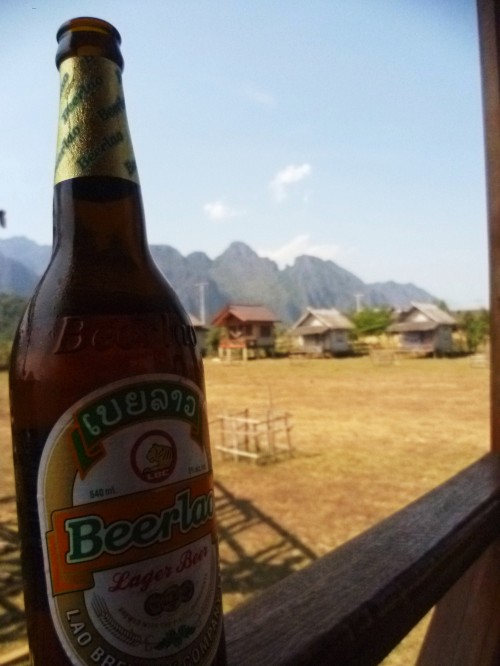 We headed to this great riverside spot that i once went to. 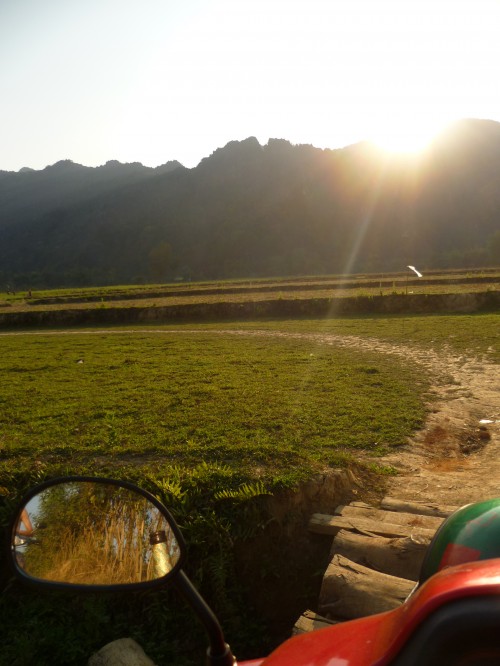 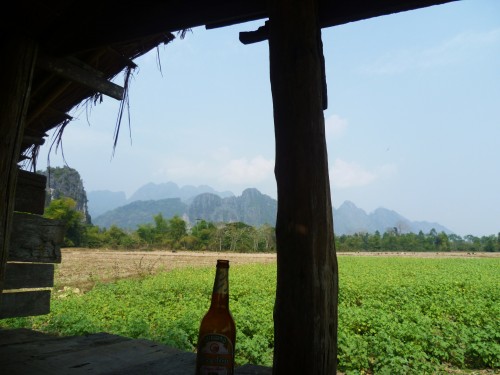 A hut for a break

Some of d boys remembered me, so we partied. They brought out some major firepower, ie lao lao. Rice liquor, similar to our langkau. 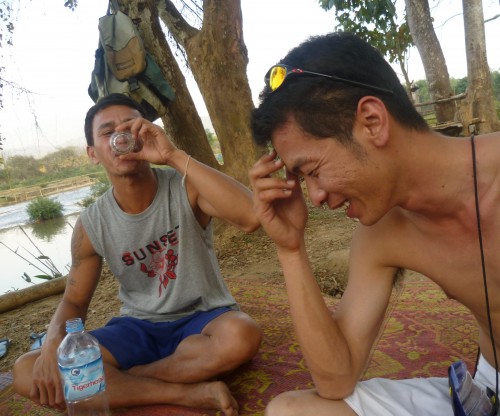 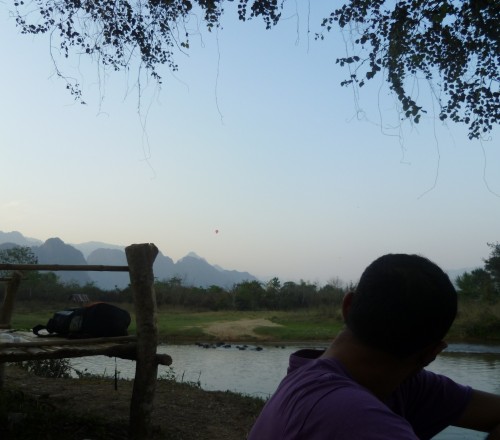 Buffaloes take a dip, as a hot-air baloon rises over VV in d distance

We went back again d next morning coz they organized a bbq party for us. We had baby birds, freshly-caught fish, wild jungle soup (which was awesome!), and sticky rice, plus whisky, beer and lao lao. 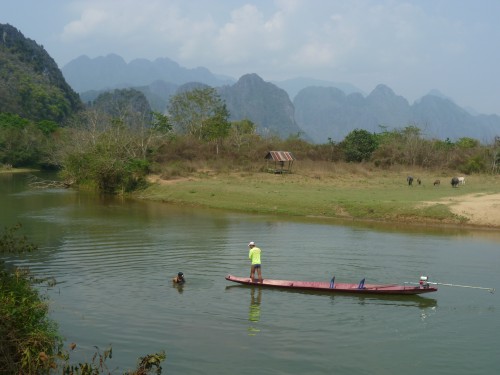 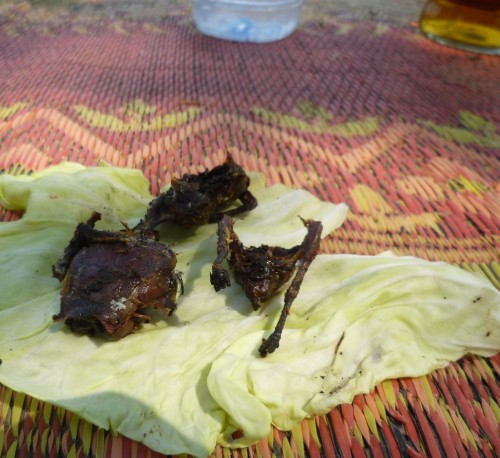 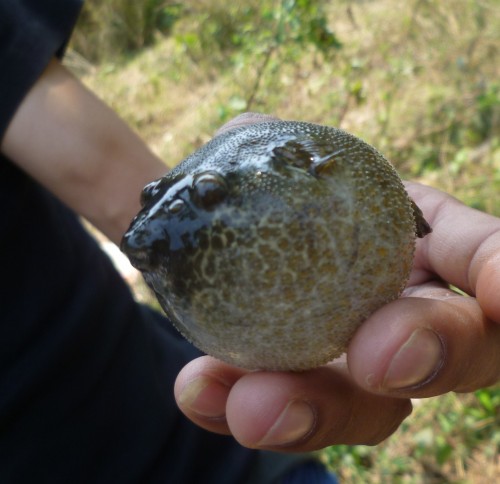 They caught a few puffer fish, that blow up when threatened 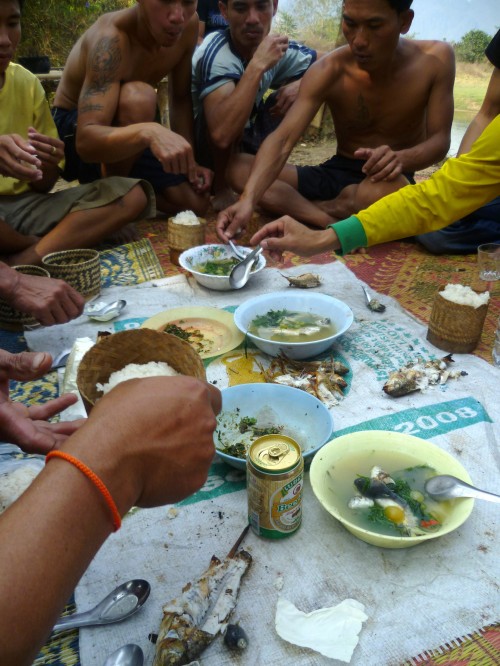 Diggin in. Except for d rice, everything was wild

Tubing (or kayaking if u prefer) is also a great way to spend a day. Ur dropped off several km upriver of VV, then u just cruise down in a tube. There’re loads of bars n party spots on d riverbank, where u’ll be thrown a line n pulled in if u want. A whole day could go by! 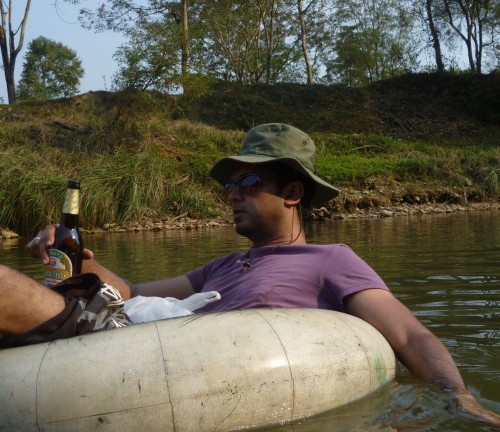 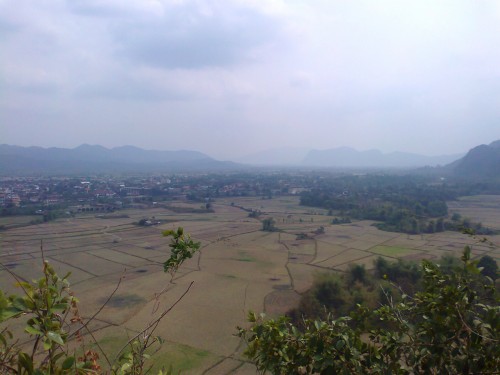 Climbed this crazy steep limestone hill near our huts 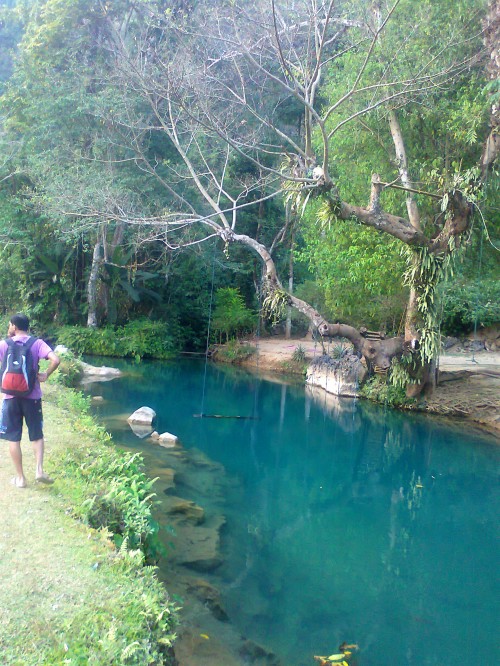 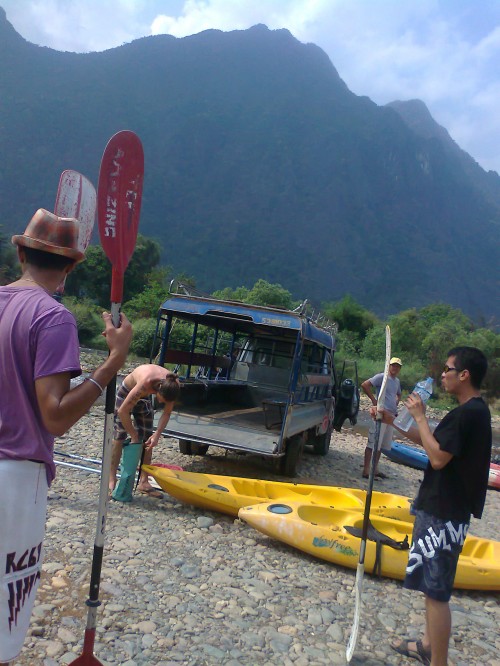 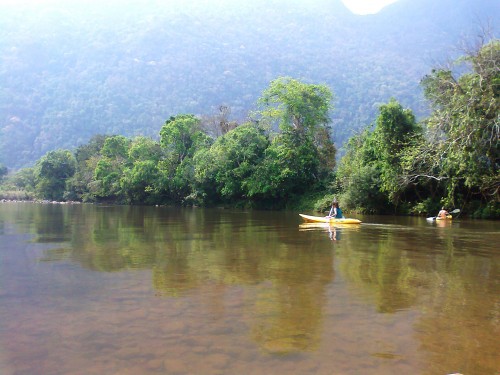 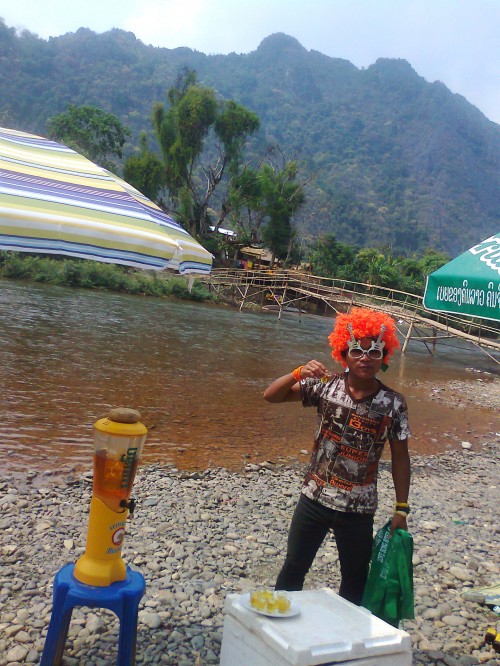 Some dude who gave us free shots of dunno wat 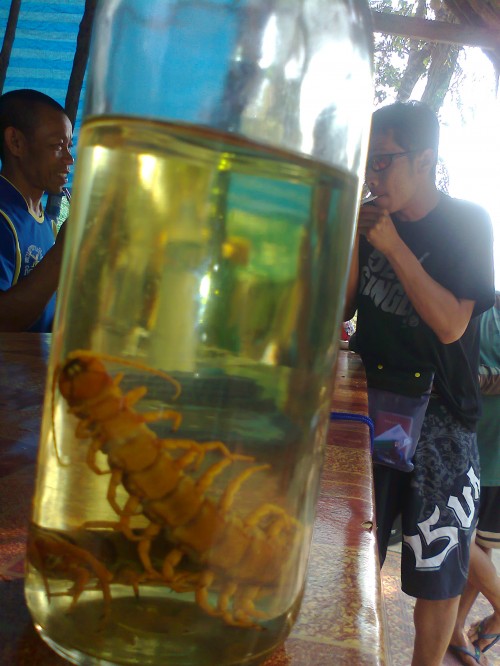 Had to do some fucking-big-centipede liquor shots 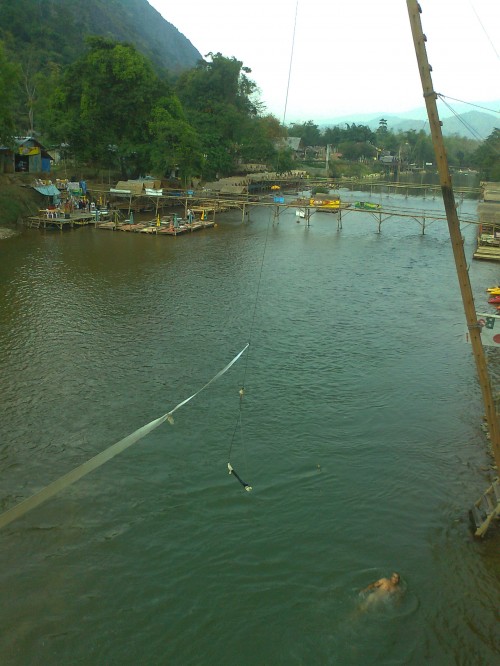 Jump off d platform if u dare 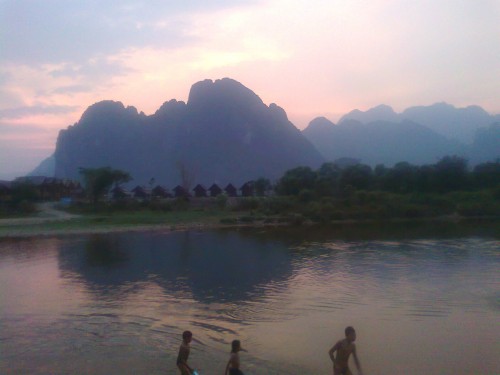 The sun sets over Laos

Great place, even greater people. Might even do it again!