Even seven-courses tend to kill me. Anyway, tried to focus on ale more than the food, but failed! 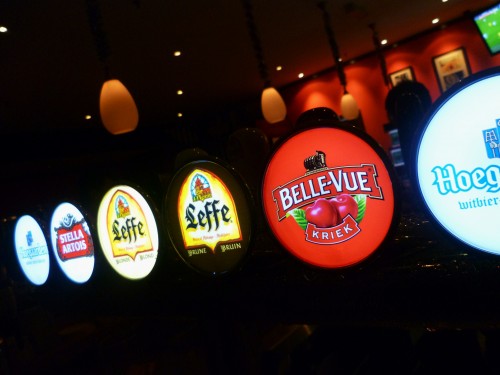 Some of the options

BBC’s menu features traditional Belgian favourites, and many of ’em have beer in the food. Nice. The menu is extensive.

The first section of the menu says “Beer Food”. Cool. 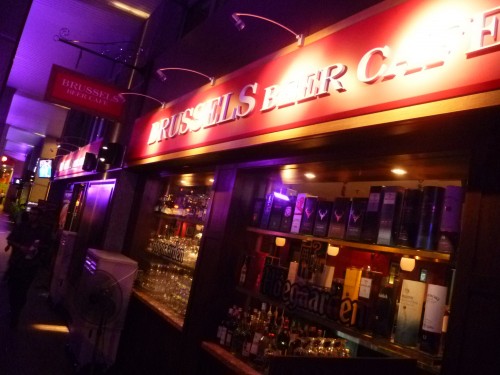 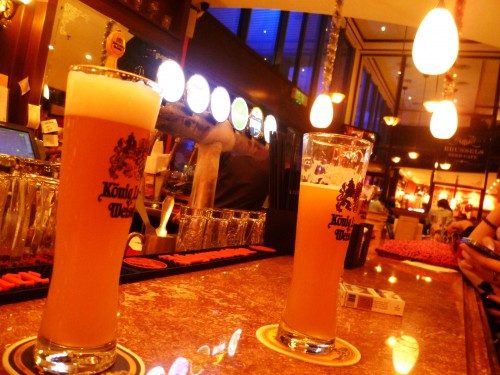 The welcome drink (and my next 8 drinks) was a Konig Ludwig (abv 5.5%), one of my favourite beers. This is a Bavarian German wheatbeer. And now…. they got it on tap, only at Brussels.

Wheatbeers are one of the oldest styles of beers around, from way back in Babylonian times. Konig (meaning King) is brewed using traditional methods. It makes a lively, refreshing ale of contrasts – a little bitter and fruity at the same time, but also creamy and dry. Kinda great with every meal.

The ales kept coming, and i kept guzzlin. Then the food started to appear.

The bread was good too

The prawn bisque arrived (a bisque is a creamy, highly-seasoned soup of French origin). This is quite a salt-infused offering, and the bread is also very dry-shrimpy, well-neutralized by good gulps of the Konig.

Belgium is famous for its mussels, so we had some. The Moules Hoegaarden ($56.60 net)  is cooked with beer, coriander, lemon and celery.Great stuff – tangy and creamy. 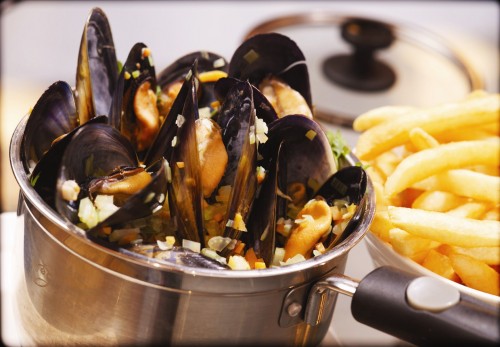 Tryin to get out are yall? Well, too late

Moules Mariniere is steamed with white wine rather than ale, garlic, celery and onion, and has distinctively bolder flavours.

What i liked most – the thick, malty, groovy sauce that the meat is sunk in. I could drink a mug of it!

Put it in a glass! 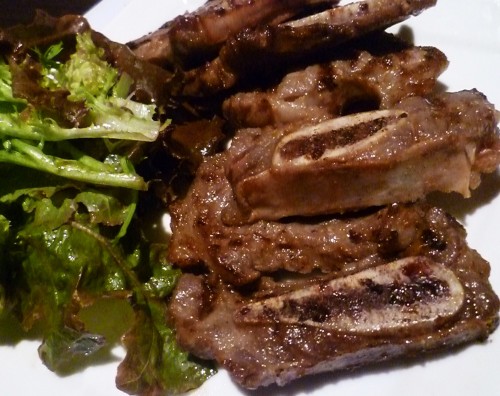 The Baby Beef Ribs ($25.30) are high-quality cuts, that are simply bbq-ed. A lil chewy, but tender as well. And juicy.

Then came some major firepower. A fuckin bucket-sized mug of Hoegaarden, followed by a boot-sized glass of Paulaner Dunkel. Thankfully there were other drinkers to work on it too.

The dunkel (dark) wheatbeers are one of my favourite varieties, as it provides a cool blend of wheat and roast. Perfect. 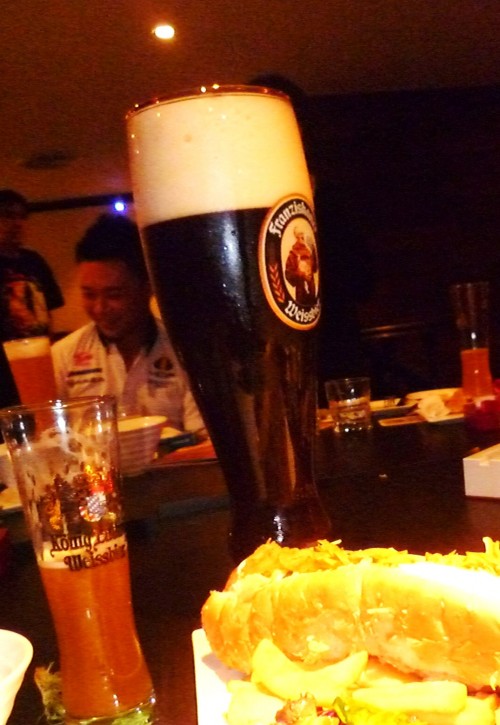 The Dunkel, next to a tall pint glass 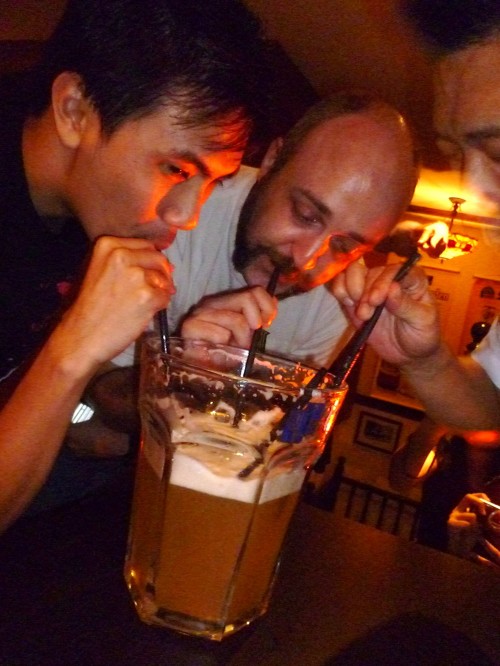 The showcase of the dinner soon appeared. It was an elephant’s dick-sized sausage. Am dead serious. Called The Big One! ($70.80). 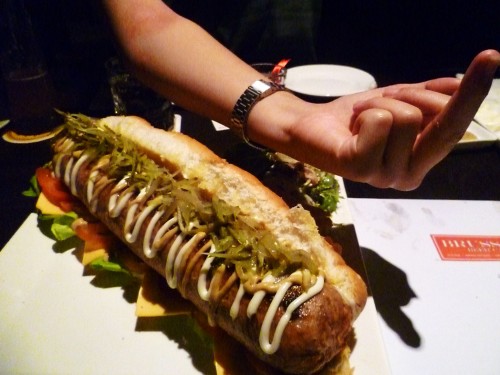 Longer than the average arm

Basically, a mega meal. Great to share, as its actually cut-up and served skewered with large toothpicks. The two-pounds of meat is really…. meaty. The sausage is very-compact, thus more filling than normal ones. I’d say five people could snack on it.

The less hungry can opt for the Pork bacon Cheesy Burger ($21.80), pork patty with bacon strips and… melted cheeeeese.

After about 90 minutes, sobriety and civil behaviour began to seriously go downhill, fast. Of course, it was thanks to us drinkin from Bigfoot’s mug.

Couldnt make it to d toilet on time, so improvized 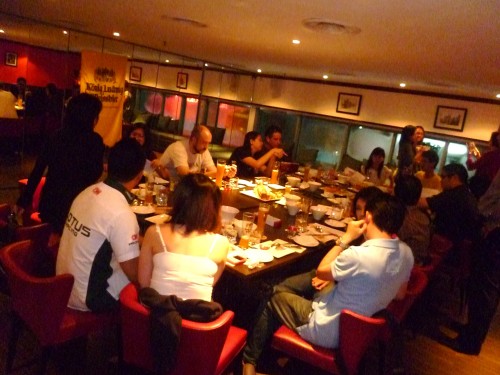 All i could think of wuz chillin. Horizontal chillin. With a bed and a movie. 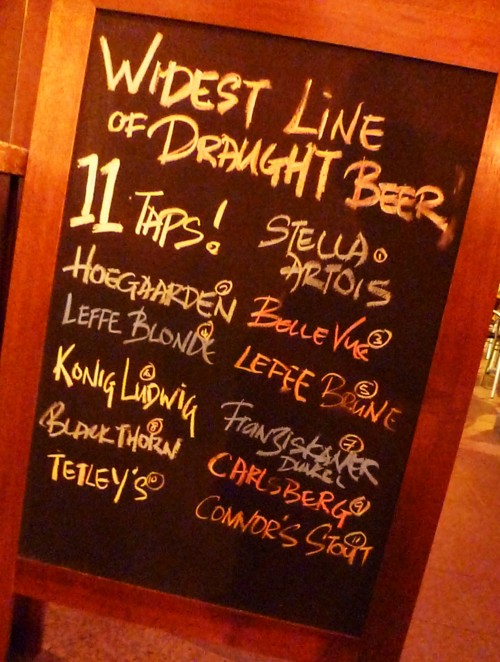 I gotta say food is generally impressive. With the variety of ales on tap, a good meal and drinks are always possible.

Will have to starve myself 24-hours beforehand if i’m invited there again.

Besides Soho KL (map), there’re outlets in Jaya One, Ampang and Hap Seng.